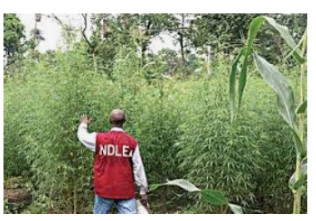 The court presided over by Justice Daniel Osiagor, convicted and sentenced the two men after they pleaded guilty to the charges of conspiracy and unlawful dealing in 200 grams of the banned weed, made against them by the National Drugs Law Enforcement Agency (NDLEA).

The two convicts, who were residents of Arikwe street, Aradagun, Badagry area of Lagos State, according to the prosecutor, were arrested on August 18, where they were selling the banned weed.

The offences which the prosecutor, Mr. Adebayo Oluwafemi, said are contrary to and punishable under sections 14 and 11(c)  of the National Drug Law Enforcement Agency Act Cap N30 laws of the Federation of Nigeria 2004.

The two men did not deny the allegations, as they both pleaded guilty to the charges of Conspiracy and illegal dealing in the banned weed.

Following the Convicts’ guilty plea, Justice Osiogor, sentenced them three years Imprisonment in each of the counts.

The judge however gave them option of fine in lieu of jail terms in the sum of N100,000 and N500,000 on count one and two respectively.