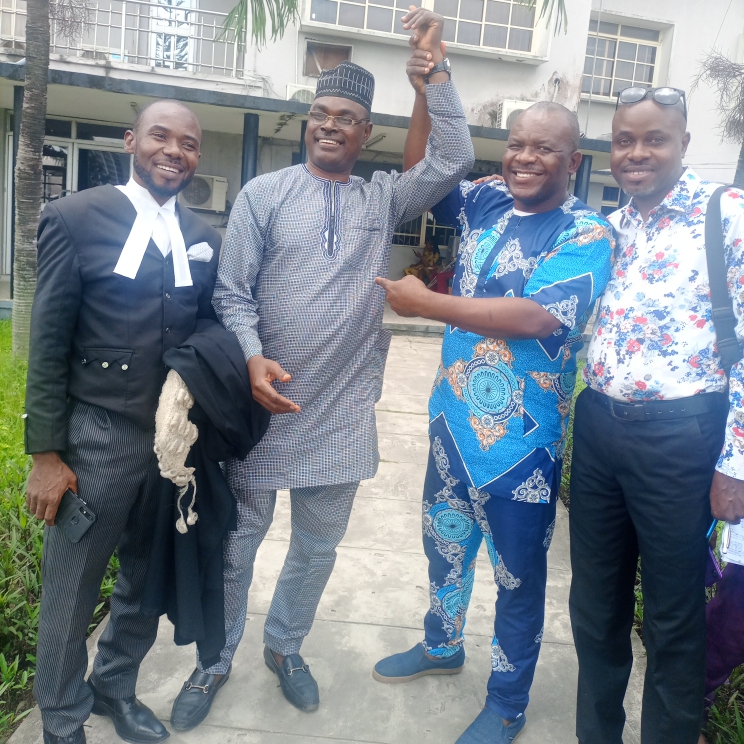 Barr. Akaegbu, Dr. Kome And Other Party Faithful After The Court Judgment

Justice Daniel Emeka Osiagor who presided over the court, gave the directive while delivered judgment in a suit filed by Dr. Koma against INEC, his party, PDP and one Abiodun Ezekiel Olufolarinwa, whose name appeared in the INEC’s list.

Kome had dragged the Independent National Electoral Commission, INEC, the People Democratic Party, PDP, and Abiodun, before the court for removing his name as the winner of the party primary election and PDP’s candidate.

In his originating summon filed and argued before the court by his lawyer, Don Akaegbu, Kome challenged INEC and PDP for substituting and submitting the name of the third respondent, as the winner of the PDP’s primary election in while he (Kome) was the actual winner.

Kome had argued that having purchased the party’s nomination form, screened and cleared by the party, he contested in the election with the third defendant, as the only two contestants in the party’s primary election.

He further stated that after the successful primary election which was observed, supervised and witnessed by INEC officials, the police and other security agents, he was later issued with the Certified True Copy (CTC) of the election results by INEC.

However, he told the court that he was shocked when he learnt someone in the party wanted his name substituted with that of the third defendant, who had earlier stepped down for him.

Kome added that at the deadline for the submission of the candidates name to INEC by the party, his fears were confirmed as the third defendant’s name was submitted by the party as the winner and published by INEC on July 15 and 22, 2022 respectively.

Consequently, he urged the court to declare him as the winner of the election and the PDP’s flag bearer in the forthcoming general election having emerged as the consensus candidate during the primary.

Other relief he sought were that the court should direct “the first and second defendants to forthwith respectively submit and publish the name of the plaintiff as the candidate and flag bearer of the second defendant for the March, 2023 general elections into Lagos State House of Assembly, Ikeja Constituency 1, according him due recognition as same.”

Responding to the suit, the third defendant, Abiodun Ezekiel Olufolarinwa, argued that the plaintiff filed the suit  14 days after his name as the winner of the primary election was published by INEC and therefore was statute barred.

Abiodun while denying  stepping down for the plaintiff also stated that the court lacked jurisdiction to hear the matter.

INEC in it’s submission, did not oppose to the court’s jurisdiction.

Delivering judgment on the suit of Friday, Justice Osiagor dismissed the preliminary objections filed by the PDP and the third defendant, and granted all the reliefs of the plaintiff.

The judge held that INEC had presented a clearance certificate to the plaintiff after the election confirming he won the primary, and rejected the argument of the third defendant that the suit was statute bar, stating that the names of winners were released by INEC on July 5, 2022, while the plaintiff filed the suit on July 27, two days before the expiration of the 14days.

The judge further stated that the plaintiff could not have filed a suit against himself immediately after the election since he had already been declared winner of the primary.

Furthermore, the judge also threw out the third defendant’s argument that he did not step down for the plaintiff, citing  evidence such as his campaign posters where he announced his withdrawal from the primary and congratulated the winner.
“Why the change of mind to now disunite the united party,” he blasted the 3rd defendant. I find merit in the plaintiff’s suit and grant all his reliefs,” the judge said.

Responding to the judgment, Dr. Kome’s counsel, Don Akaegbu, commended the judge for delivering judgment in the favour of his client, while urged INEC to ensure it abided by the Electoral Act.

In the same vain, Dr. Kome also called on the third defendant to join hands with him to ensure the party wins the Constituency in 2023.