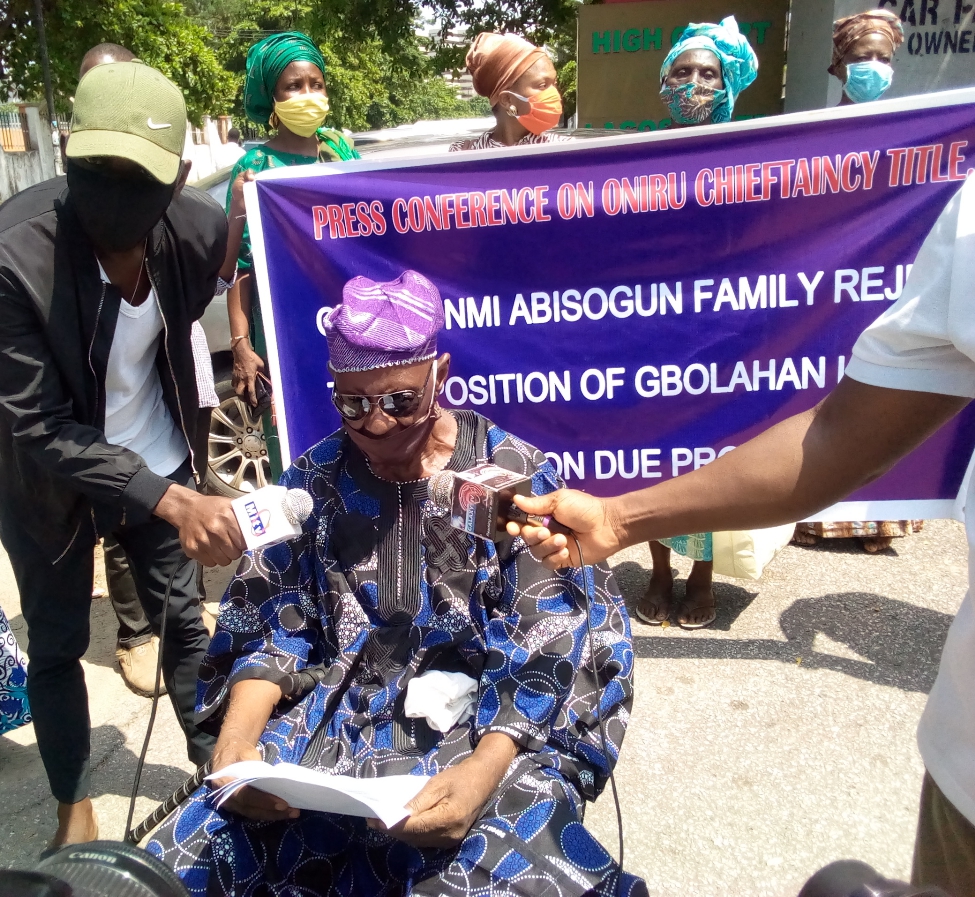 One of the ruling houses in Iruland, Victoria Island, Lagos, the Omowumi Abisogun Oniru ruling family, has rejected the installation of Oba Abdulwasiu Gbolahan Lawal, as the new Oniru of Iruland, on the ground that he is not a member of their family.

Consequently, they are calling on the federal government to prevail on the Lagos State government, to reverse the installation Lawal and chose one of them as the king Iruland.

Abisogun Oniru Ruling Family made the appeal during a protest on Tuesday at Igbosere High Court of Lagos.

The newly installed king, Oba Lawal, a former Commissioner of Agriculture in Lagos State was installed as the king of Iruland on Sunday, by Governor Babajide Sanwo-Olu.

Speaking on the alleged illegal installation, the head of the Omowunmi Abisogun Oniru ruling house, 88 years old Alhaji Surajudeen Durosinmi, said they reject Gbolahan Lawal, as the new Oniru installed by the Lagos state Governor, Babajide Sanwo-Olu, because is not part of their ruling house.

Durosimin said the entire family of Abisogun ruling house of Oniru descendants are next in line in the kingship stool.

He said “the entire family of Abisogun ruling house of Oniru descendants as the next in line ruling house unanimously reject the imposition of Wasiu Gbolahan Lawal as the Oniru of Iruland by Governor, Babajide Sanwo-Olu, in contravention of the enabling laws providing for the appointment of ‘Next in Line’ in succession to the Oniru Chieftaincy stool and the customary law regulation selection to the Oniru chieftaincy of Lagos of September 14, 1993”.

“We affirm and state by the resolution of all the kingmakers, the Baales and elders of the Abisogun family as the ‘Next in line’ ruling house to produce Oniru of Iruland,” Durosimin said.

The octogenarian further states: “the first class Obas and chiefs in Lagos state and as duly communicated and convened to the traditions institute in Lagos State and the government of Lagos state particularly, we reject Lawal and see it not only as a brazen desecration of traditional but also a suppression of the clear extant laws of the land in respect of the procedures for choosing a new king.

“For the record, the imposed Wasiu Gbolahan Lawal was not even in contention as he is only connected to the Oniru Royal House through his mother side, by which he is forbidden by tradition to even seek election to the throne in the first place.

“Since the demise of Oba ldowu Oniru, we have noticed a handful of strong arm tactics by unscrupulous elements to hijack the Oniru stool for personal and political gains. As elders of the Abisogun family, we were approached and cajoled with money and other material trappings by these elements to waive our right to the throne as if the stool of Oniru was for the highest bidder We rejected these trappings and headed for the court of law to prevail on those bent on using their connections to the seat of power in Lagos State from usurping and trampling upon out right. In the litigation that was filed, the Executive Governor of Lagos State, the Secretary of lru/Victoria Island Local Government and the Attorney General of Lagos State were all served a defendants alongside other parties and all of them filed conditional appearance which case i yet to be heard.
“We are however shocked that the State Government will act illegally and support illegality by acting prejudice over a case that is the subject of litigation in a court of law which determination is still pending, by going ahead to impose Wasiu Gbolahan Lawal as the next king of Iruland.

“We call the attention of the Lagos State Governor, Babajide Sanwo-Olu to the fact that this imposition is an illegality that will not stand and one that shall be resisted and fought by ever lawful means. We are also saddened that the pursuit of truth, the dispensation of justice and the rectification of injustice have all left the citadel of integrity that government should represen We call on the Governor, Babajide Sanwo-Olu to retract this brazen injustice”.

Lawyer to the aggrieved family, Cornelius Nwachukwu, described the action of the state governor on installation of Oba Agbolahan Lawal, as ‘executive recklessness’, saying that the Governor went ahead despite knowing that there is a pending suit against installation of new Oniru.

Nwachukwu said: “my clients, the Omowunmi Abisogun Oniru Chieftaincy Family are in court over this matter and the Lagos State Governor, Attorney-General, Commissioner for Local Government and Chieftaincy Affairs; Secretary to Victoria/Iru LCDA are respondents.

“All parties have filed applications which are yet to decided because of the lockdown. This is injustice, to take advantage of the lockdown of COVID-19 to installed a stranger upon them.

“The suit number is LD/6681/JCMW/ 2020, is before Justice Owolabi Dabiri of Lagos State High Court, Igbosere.

“This is an executive recklessness, even before the institution of this suit, several letters and memos were written and nothing was done.

“All we want is that the Governor should prevail on perpetrators of this act to stop forthwith, because it is illegal”.