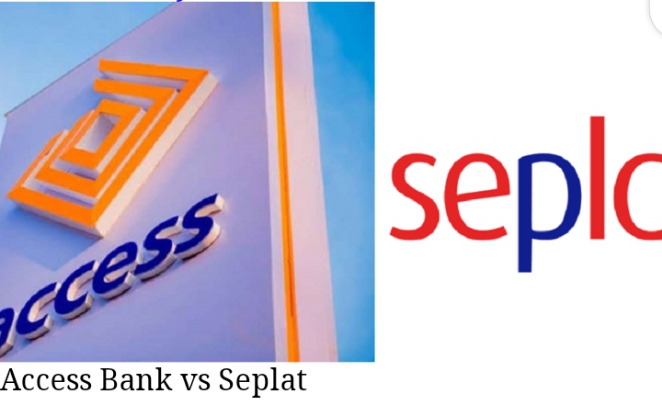 The bank in it’s petition against Koku and Uwa, stated that both senior lawyers engaged in acts unbecoming of legal practitioners and contravened well established legal principles in bad faith.

Access Bank had through its receiver-manager Mr Kunle Ogunba (SAN), taken over the corporate office of Seplat Petroleum Development Company Limited over a debt based on a court order.

The ruling which was thereafter appealed by Seplat, had granted it leave to possess the corporate offices of Seplat, as well freezing its accounts, over a loan obtained by Cardinal Drilling Services Limited, which according to the bank, was utilised by Seplat.

However, the indigenous oil firm had insisted that its property could not be taken over because of the loan, running into millions of dollars, was given to Cardinal Drilling and not directly to Seplat.

In the letters to both bodies, Access Bank accused Koku of “aiding and abetting his client’s engagement in acts contravening well established legal principles and illegalities all in bad faith to prevent his clients from fulfilling their corporate responsibilities”.

The bank further maintained that the senior lawyer “Engaged in acts calculated to deliberately obstruct, delay and ultimately affect the administration of justice.”

It stated that the email written conveying the execution of the order of the Court of Appeal to the bank was replete with fallacies, insisting that notwithstanding the fallacies contained, Koku failed to immediately caution his client Dr Ambrose Orjiako to refrain from instructing his company Seplat from making such misleading statements.

“Furthermore, Seplat being directed by its Chairman, Dr. Orjiako published several notices, alleging that it had repossessed it Head Office,” Access Bank noted.

It added that a public notice released by Seplat was also replete with fallacies, all intended to deceive the general public and whip up public sentiment in favour of the company. “A close examination of the public notice will reveal this mischief particularly the fact that the said publication deliberately seeks to mislead the general public into believing that the entire building, housing companies other than Seplat was closed up, thereby portraying the bank as irrational”, it said.

“It is befuddling for Seplat being directed by its chairman to allege that the said order had been executed, save for the deployment of illegal means approved by its chairman in any such purported execution,” Access Bank stated.

Citing Rule 15 (2) (a) of the Rules of Professional Conduct for Legal Practitioners 2007, the bank said that a lawyer shall keep strictly within the law notwithstanding any contrary instruction by his client, and if the client insists on a breach of the law, the lawyer shall withdraw his service.

Flowing from the above, the bank affirmed that Koku having failed to withdraw representation of his client in breach of the law, but rather encouraged, defended and corroborated in such illegalities had breached the rules of professional conduct.

“We urge the committee to determine this instant petition in favour of the petitioner and hold that Koku is indeed guilty of professional misconduct and conducts unbecoming of a legal practitioner and proceed to sanction this conduct to serve as a deterrent to other legal practitioners,” it said.

On Uwa, Access Bank accused him of deliberately making, publishing and/or causing to be published false statements of facts and law and  participating in making extra judicial statements calculated to prejudice and/or interfere with the fair trial of a pending suit  It also said the senior lawyer aided and abetted his client’s engagement in acts contravening well established legal principles and illegalities all in bad faith to prevent his clients from fulfilling their corporate responsibilities.

The bank stated that Uwa “Engaged in acts calculated to deliberately obstruct, delay and ultimately affect the administration of justice and failed to observe promises to opposing counsel thereby failing to adhere to agreements implied by such promises.

“Why did Etigwe Uwa stormed the asset accompanied by heavily armed policemen while he was fully aware that the petitioner had caused to be filed a Notice of Appeal to the Supreme Court alongside an application for injunction pending appeal?

“How did Etigwe Uwa procure policemen on illegal duty to accompany him to attempt to repossess the asset in a gestapo like manner, without the mandatory Sheriffs of the Federal High Court? “Is Etigwe Uwa’s attempt to foist the apex court with a situation of fait accompli a conduct becoming of a legal practitioner?,” the bank queried.