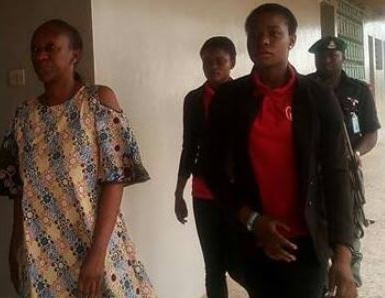 Mrs. Adio With EFCC Officials During One Of Her Trials

 
The Ibadan division of Court of Appeal, on Tuesday, set aside the conviction against a former Oyo State High Court Registrar, Mrs Omobola Mutiat Adio, in Appeal No: CA/IB/202C/2020.

It would be recall that Mrs Adio was convicted and sentenced to a five-year jail term by the Oyo State High Court presided over by His Lordship M. O. Olagunju on March 6, 2020, on a count charge of stealing of the sum of N22.3 million.

The offence according to the Economic and Financial Crimes Commission (EFCC) was contrary to Secton 390 (9) & (11) of the Oyo State Criminal Code Law.

In discharging, acquitting and reversing the Mrs. Adio’s conviction, the Court of Appeal panel led by Justice F. A. Ojo, in their judgment held that the EFCC failed to prove all the ingredients of Stealing against the Appellant and that the trial Court erred to have convicted and sentenced the Appellant.

The Panel held thus: That the prosecution failed to prove the ownership of the money allegedly stolen.

That the Prosecution failed to prove that the money subject matter of the offence belonged to Guaranty Trust Bank.

That a money which is given out to a party with security is not capable of being stolen.

That the Economic and Financial Crimes Commission failed in its duty to show that the money allegedly stolen by the Appellant was fraudulently taken.

That the Confessional Statement relied upon by the lower Court was not direct, unequivocal and failed to pass the furnace of reliability as established in our case laws.

The Court of Appeal concluded that the transaction leading to the trial and conviction of the Appellant was a business transaction which the Economic and Financial Crimes Commission had no jurisdiction to entertain in the first place.

The 3-man panel was unanimous in their decision and the conviction by the Oyo State High Court was set aside and the Appellant who is presently at the Correctional Centre Agodi was discharged and acquitted.