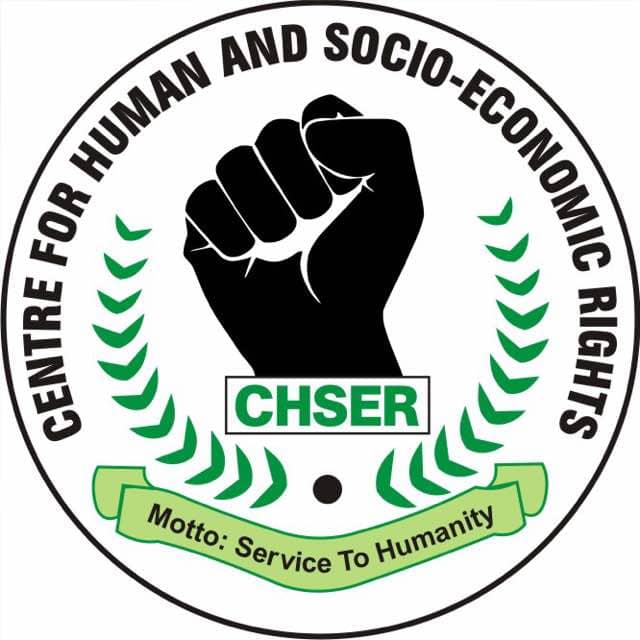 Centre for Human and Socio-economic Rights (CHSR) and two others have lamented high rate of insecurity and unrest which followed the recently held EndSARS Protest.

CHSR alongside Activists for Good Governance; and Centre for the Protection of the Indigenous Peoples’ Rights, also commended the men of Nigeria Police, especially, the men of Lagos State Task Force, for acted professionally in the face of the attack and shootings, during the protest.

The three groups led by Comrade Alex Omotehinse; Comrade Declan Ihekaire and Comrade Olatunde Owoeye-Wise, made above expressions at a press briefing held in Lagos, today.

The groups in their speech titled ‘security situation in Lagos, aftermath of the #EndSARS protest and its effect on the security of our lives and properties’, while sympathized with the families and friends of the victims of the protest, also urged the police authority to ensure that in any of their call to duty engagements civility should be  the watchword.

The groups’ statement reads in part: “in view insecurities in the State and having watch with keen interest, the CHSR and it’s allies strongly condemn the present state of unrest and anarchy in Lagos State.

“The security situation in Lagos State is becoming unbearable as  looters, hoodlums and miscreants has taken over the streets in almost every part of the state, thereby degenerating to unrest, panicking and in some places leading to lives been lost.

“Our attentions have been drawn to an online report of an incident that occurred around Oko Oba area of Agege, in Lagos State where some  hoodlums suspected  to have attacked the isokoko police station where over 30 operational rifles of the  police were carted away in the wake of the #Endsars protest which is a short distance to Abattoir where an attack was targeted at the Lagos State Ministry of Agric warehouses in a bid to looting the Lagos state palliatives.

“The hoodlums who were armed opened fire at the police team stationed to maintain law and order within that perimeter, and the police in a counter move retaliated leading to pandemonium   which later resulted to an unfortunate loss of a life.

“We as a right group have noticed of recent the state of lawlessness, anarchy and other forms of criminalities in Nigeria but particular reference to Lagos State, hence the call on the  law enforcement agencies to rise to the challenges of curbing this spates of lawlessness.

“It should be clear to all that a no police state is a  state of anarchy that does no good to anyone.

“After a careful study of events of the Oko-Oba, Agege incident, We as unbiased, trusted  group categorically state that men of the Lagos task Force and other police formations on ground acted professionally in the face of the  attack and shootings.

“We sympathizes with the families and friends of all  victims of this present unwarranted situation in the state. as we equally urge the police authority to ensure that in any of their call to duty engagements civility should be  the watchword.

“Finally, intelligent gathered by us have shown that residents stands a risk of attacks therefore call on police to beef up security all over the State for those who hijacked the EndSARS protest, burnt police stations and carted away arms and amunition, police uniforms are definitely going to put in place the usage of such dangerous weapons. A call to end police brutality should not translate to mean end police”.