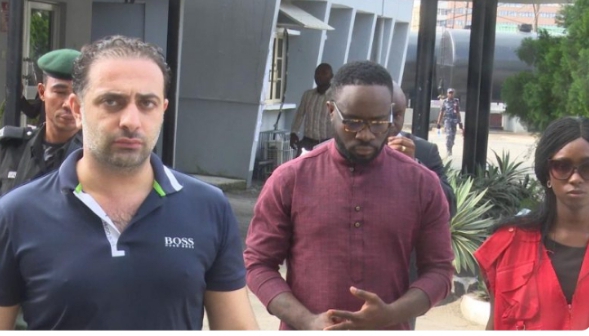 Koudeih And His Co-defendant In The Alledged Crimes, Kayode Philip

A Lebanese, Hamza Koudeih, who is facing charges of cyber fraud and money laundering, before a Lagos Federal High Court, today, begged the court to allow him to return to his country for medical checkup.

But the Economic and Financial Crimes Commission (EFCC) opposed his application on the ground that he was a flight risk and that he will never return to Nigeria to answer criminal charge hanging on his neck.

The Lebanese, a resident of Eko Atlantic in Lagos, approached vacation judge, Justice Ringim Tijjani via a July 18, 2021 application filed and argued by his counsel Abdulhamid Mohammed.

He sought permission to see his psychiatrist in Beirut, the Lebanese capital and prayed the judge to release his international passport to enable him process his trip.

“Before my arraignment before this Honourable Court, I have been under periodic medical treatment for generalised anxiety disorder and major depressive disorder by my Doctor in Lebanon, Dr. Georges Elie Karam (MD), a Psychiatry and Clinical Psychology Medical Doctor in St. George Hospital University Medical Centre, Beirut, Lebanon,” Koudeih said.

He explained that following his arraignment and trial in Nigeria, he had been seeing Nigerian physicians, including Dr. B. Fadipe who “recommended certain medications to subside the symptoms of my health challenge, although the treatment did not yield any positive result…

“As a result of my medical condition, I usually become anxious, depressed, suffer from insomnia, emotional distress, unwanted thoughts, excessive vigilance and constant fear, shortness of breath, palpitation and other symptoms ascribable to the medical challenge,” Koudeih added.

He said Dr. Karam advised that he required further investigations of his medical condition and treatment in Lebanon, necessitating that he travel abroad, adding that he had a Nigerian wife and son, both resident in Lagos.

In opposing Kohideh’s application, EFCC counsel, Rotimi Oyedepo said: “We are vehemently opposing this application. This is a ploy to run away from the trial pending before this court.

“Going by the exhibits annexed by the applicant, how can a (Nigerian) doctor who has treated the applicant for 14 years now suddenly say that he can no longer be doing so? There are hospitals in Lagos that the applicant has been using.

“This defendant is a citizen of Lebanon. What if he is granted permission to go and he wouldn’t return”?

Oyedepo referenced a counter affidavit sworn to by an EFCC investigator, Idi Musa, in support of his opposition

He contended further that “the claims of the applicant are not verifiable and the attached Exhibit is a ploy to pull a wool over the judicial eye of this honourable court to grant the Applicant’s prayers”.

According to him, it would be in the interest of justice “to refuse the Applicant’s Application, more so when the proof of evidence before this Honourable Court clearly linked the applicants to the alleged offence.

“On the whole, I urge my lord to refuse this application”.

According to the EFCC, Koudeih is an associate of Internet celebrity, Ismaila Mustapha, alias Mompha, whom the anti-graft agency has also charged with N32.9 billion fraud.

The defendants were arraigned in November last year by the EFCC, which accused them of attempting to retain the sums of $6 million and £1 million in the Bank of China.

The EFCC said they also “knowingly engaged in computer phishing and spamming which resulted in acquiring sensitive information” from various emails.

Philip, according to the EFCC, also procured Dakota Entertainment Ltd and Influx Computer and Hardware Limited, for N11mllion and N19.25million, respectively.

The EFCC said the funds were proceeds of fraud.

The anti-graft agency said Koudeih and Philip acted contrary to the provisions of the Money Laundering (Prohibition) Act 2015; as well as Section 27(1)(b) of the Cybercrimes (Prohibition, Prevention, etc) Act 2015.

Both defendants pleaded not guilty.