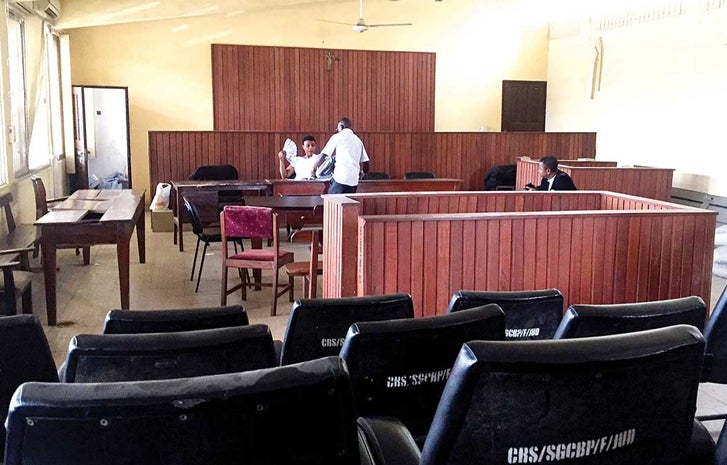 The Executive Director of National Film and Video Censor Board (NFVCB) Alhajj Adebayo Thomas alongside some officials of the Board are currently enmeshed in alleged N2.5 billion fraud and other infractions.

Information gathered by this medium revealed that Alhaji Adebayo and the said officials numbering about 18 are currently being question by the Independent Corrupt Practices and Other Offences Commission (ICPC), over alleged fraud and infractions, such as financial recklessness, abuse of ofice and diversion of public fund/property for personal use.

ICPC investigation and interrogation of the NFVCB boss and others was sequel to a petition to the Commission by some staffers of the board.

The Board’s officials led by Mr. Cornel Agim, Director of Licensing and Documentation and others in a petition dated September 4, 2019, listed several infractions of the Executive Director and his cohorts.

The petition captioned ‘Call for immediate investigation of abuse of office for financial gain, criminal intimidation and diversion of public funds to the tune of N2,200,000,000,00 (two billion, two hundred million Naira) by Mr. Adebayo Thomas of the National Film and Video censors Board in collaboration with Abdulkadri Fatima, Inwang Effiong Okon, Adinye Irene and Others’.

Consequently, the board officials who perceived the action of Alhaji Adebayo as ……, called on the ICPC to thoroughly investigate him and others and also to prosecute them if found wanting of the allegations.

The petition made availablti this medium reads in part: “I write as a director in the service of the National Film and Video Censors Board to bring to your attention for urgent investigation serious infractions on our laws, financial recklessness, abuse of office and diversion of public fund/property for personal use by Mr. Adedayo Thomas, using as fronts some members of staff of the board.

“Mr. Adedayo Thomas is currently the Executive Director of the National Film and Video Censor Board (He is hereinafter referred to as “Mr. Thomas”) who was appointed to that position in 2017. Three months after assumption of duties, Mr. Thomas commenced shocking diversion and outright stealing of moneyand properties belonging to the board.
I shall hereunder enumerate such actions of Mr. Thomas while calling upon you to use good office to commence immediate investigation.

“Stolen generator, Barely 3 months after resumption of duties by Dr Thomas, the massive generator in the Lagos office disappeared. Discreet investigation revealed that Mr. Thomas with other persons broke into the premises through the back fence on Saturday, 3rd June 2017, and took away the generator on the pretext that it was auctioned to a bogus Federal Government auctioneer, one Mr. A. Olanrewaju.

“We also discovered that Mr. Olarenwaju made a cash payment and an Instant Transfer of N800,000.00 (Eight Hundred Thousand Naira only) through Mr. Olarenwaju’s Guarantee Trust Bank account to Adedayo Thomas personal account in ECOBANK with number 2121006500, as part payment for the generator on the 2nd June 2017, prior to the theft of the generator.

“It was also revealed that when Mr. Thomas and his accomplice were stealing the generator, the crane lifting the generator was intercepted by Police officers attached to Force Criminal Investigation and Intelligence Department, Alagbon, Lagos (The Lagos office share same fence with the police) and kept the generator in their premises for over a month. This gave Mr. Thomas the opportunity to perfect the forgery of some auctioned papers for the release of the generator and the Crane by the Police.

“Iurge your good office to revisit this issue. Also note that the Presidential Panel on Recovery of Public Property investigated and discovered where the generator is kept”.

The petitioner also alleged that the Board’s Executive Director carted away some items from the Board’s headquarters in Abuja. These items include electronics worthes million of Naira.

“Also barely three months into his resumption, Mr. Thomas ordered the evacuations of several Air conditioners, TV Sets, Laptops and Refrigerators worth millions of Naira from the main store of the Board in Abuja purportedly to be taken to zonal offices, but these items never reached their destinations.

They were all diverted for his private use. The lady in charge of store was asked to sign a fake receipt of items but refused has since been posted from Lagos to Sokoto notwithstanding that she is married and her family based in Lagos”.

It was also alleged that the Executive director fake tenders board meeting held on September 6, 2017 and app N5m paid by an insurance company for the replacement of the board’s Toyota Haice bus stolen in Kano, while two Directors who were supposedly part of the tender’s board meeting were excluded from the signing of the documents on the pretext that there were out of the country. And whereas, it was stated that no such meeting was held and the Directors were not contacted because the fact that they may likely protest if such issue is raised and a vehicle was not purchased as indicated in the document.

On allegation of embezzlement of N2.2 billion, meant for 2018-2019 capital  project, the petitioners stated thag was equally discovered that money meant for capital projects of the board were grossly diverted by Mr. Thomas using different members of staff as fronts. On different occasions will approve moneys in the names of some staff on the guise of international trips but the staff will not embark on the trip but the approved will be paid to the staff’s salary account (in contravention of Public Service Rules regarding Accountable Advance) who will thereafter withdraw same and return substantial amount back to the Executive Director as kick back. On other occasions, he simply approved the money to himself. Examples of such diversion of funds and the amount are listed hereunder:
Those allegedly shared the money and what each persons received are: Abdulkadir Fatima, N43, 286, 780; Adedayo Thomas (ED) = N23, 922, 323, Inwang Effiong Okon, N37, 455, 825;  Adinye Irene Agor, N11, 369, 205;Amaechi Chioma,N16, 855, 700; Athar Bola, N8, 172, 530; Saadu Fatima,N9, 646, 950, this lady received these monies after her retirement as a Director)

The Board’s officials also alleged the the man in the eyes of storm, resorted to intimidation in other to silence anyone who attempt to expose his alleged unlawful acts.

It was gathered that the Executive Director was once being investigated by the now disbanded Presidential Investigation Panel on Public Property (PIPPP) and he was indicted and charged to a Magistrate Court. But the charges were withdrawn to enable the panel through the office of the Attorney-General of the Federation while another charges was prefer against him and other at the High Court. This could not be done before the panel was disbanded. Your commission may wish to call for the investigation report of the panel to aid your investigation.

Efforts to get the reaction of ICPC on the petition and state of investigation of alleged acts, were fruitless, as the call put to the agency on 0803 123 0280 and email sent to their email address on  info@icpc.gov.ng were not responded to.