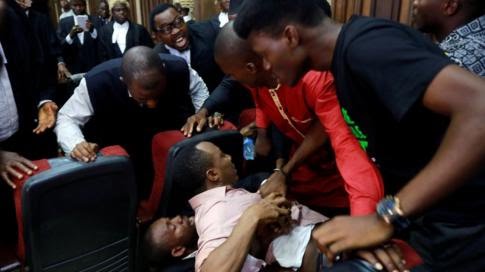 On August 3, 2019 Omoyele Sowore, a former presidential candidate, was arrested by the Nigerian Department of Security Services for alleged treason after calling for a protest tagged “RevolutionNow”.

The Department of State Security (DSS) in flagrant disregard to a court order allegedly stormed a court of law to rearrest Sowore who had been granted bail.

According to Sahara Reporters, an online newspaper, in which Sowore has interests, DSS Officers Strangled Sowore and brandished guns in an attempt to rearrest Him.

It would seem, Nigeria and its present crop of leaders under the leadership of those suffering from a severe case of hangover from the country’s protracted years of military rule in which the law of the jackboot reigned supreme.

The question arises, when will the country lose appetite for ex-military rulers who show up in civilian garb and claim they can make right, what they could not do as dictators? Of recent memory, we have Olusegun Obasanjo who spent or squandered eight years in power and Muhammad Buhari who is on course to do the same.

Despite being granted bail in October, authorities have continued to hold Sowore, sparking an outcry from his supporters in Nigerians and indeed the world watched horrific images showing Sowore pinned to the floor during scuffles with state security agents after a court hearing.

Sowore’s co-defendant, Olawale Bakare, was also in the custody of DSS, It comes a day after a court ordered that the pair be released by Nigeria’s Department for State Security (DSS).

Sowore’s legal counsel, Femi Falana (SAN) told reporters: “We either run this country on the platform of the Rule of Law or we resort to gangsterism which is what is going on”..
According to the BBC, earlier this year, Mr Sowore called for revolution because he said Nigeria’s elections were not credible. That followed the re-election of President Muhammadu Buhari. He is quoted to have said in a tweet on 2 August “All that is needed for a #Revolution is for the oppressed to choose a date they desire for liberty, not subjected to the approval of the oppressor,” One day later, on 3 August, he sent another tweet: “DSS invades Sowore’s.” He has since been charged with treason, money laundering and “cyber stalking” for allegedly sharing false and insulting information about President Buhari.

He had denies all the charges, despite the granting of bail, the DSS continued and persists to hold him in custody, saying no-one had come to claim him. But Sahara Reporters said his lawyers had been denied access when trying to collect him from jail in Abuja. His trial is due to continue in February.

“I am outraged by the blatant harassment of Omoyele Sowore, an activist and journalist whose only crime appears to be exercising his right to free expression. In a concerted effort to secure his release on behalf of the Sowore family living in New Jersey, my office has been working closely with the State Department as Mr. Sowore’s case languished following his arbitrary arrest back in August.

“While we continue to seek immediate answers about Mr. Sowore’s treatment and conditions in jail, I will be further engaging directly with U.S. Ambassador Mary Beth Leonard in Abuja to raise this case at the highest levels of the Nigerian government so the Buhari administration gets the message that we are committed to defending Mr. Sowore’s rights and securing his release.

Senator Menendez has been involved in efforts to secure Sowore’s release after his family in New Jersey approached his office about it. Amnesty International declared Sowore a prisoner of conscience on November 20. Sowore, a New Jersey, USA resident, is married to Ope, an American citizen who has taken her campaign for his freedom to the United Nations.

Without saying, this development if not urgently and amicably addressed, could have far reaching implications for the government and Nigerians as a whole. The prospects of economic sanctions loom large like an ominous cloud over the less privileged citizenry, who will ultimately feel the brunt.

Most Nigerians interviewed, have expressed that it is not be far fetched to say that this situation is reminiscent of the detention and mysterious death in detention of M.K.O Abiola, a Yoruba man, who in popularity, transcended tribal and ethnic regions of the country and who also won what has been described as the most transparent, democratic election ever conducted in Nigeria’s history.

The two Chambers of the Legislature: the House of Representatives and the Senate, make up the law-making body in Nigeria. They have a sacred and constitutional role to put a check on the excesses of the executive arm of government at all times, despite party affiliation, not when it suits it’s narrow purposes. Its failure could precipitate anarchy.

Buhari as a young soldier, was involved in successive military usurpations of power which culminated in his ruling the country as head of state at the age of 41. Now, He has the ultimate responsibility to call the security forces to order and ensure that freedom of speech and the rule of law prevails at all levels of a democratic dispensation in which he now partakes through the gracious mandate of the Nigerian people.

A 48 year old Sowore is not new to activism. He has had his fair share of brushes with dictatorial authorities in his student days. Meanwhile, the world looks on as his saga unfolds.

As a Chairman for Alliance for Democracy  we are asking the government to release Sowore and obey and respect the Constitution of Federal republic Nigeria and we hope in our cases in d Supreme Court in Lagos State’s elections, we hope to have justice because we won the election.

1 thought on “Sowore: The Struggle Continues”