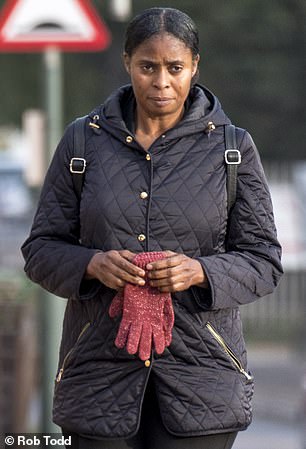 Olusola Owoeye, a Nigerian woman, described as ‘benefits Fraudster’ has been jailed two years by a United Kingdom Court, for falsely claimed the sum of £144, 000.

Owoeye, a mother of three, was said to have falsely claimed the money, after telling council she was homeless after she  had rented out her own house.

Daily Mail Online reports that the 49 years Owoeye, bought her own home before claiming she was homeless and that she rented out her property after Bexley Council gave her a flat, a court heard.

She was found guilty of three charges of fraud following a four-day trial.

Owoeye was described in court as a ‘dishonest, greedy woman’ who wanted money for nothing.

“The single mother-of-three bought her own home before claiming she had been made homeless and was then given a flat by her local council, a court heard.

“She then rented out her original property, which she had purchased with a fraudulent mortgage, charging tenants up to £820 a month.

“The convict, who is Nigerian, is thought to be the first person in London to be convicted of fraud after receiving payments while under ‘no recourse to public funds’ (NRPF) immigration status. She pocketed more than £114,000 over five years.

“An immigrant with this status cannot access the mainstream benefits system, homelessness assistance from a local authority or social housing.

“But they can get other publicly-funded services and would not be breaching their immigration conditions if they receive these.

“Owoeye may have to sell her home to pay back money to Bexley Council in south-east London. She was found guilty of three charges of fraud following a four-day trial at Woolwich Crown Court last month.

“She was subsequently jailed for two years by Judge Jonathan Mann QC, who told her: ‘There is only one reason you did what you did and this is because you are greedy. For you this was money for nothing”.

Owoeye according to the Daily Mail Online, rented out her original property (centre), which she had purchased with a fraudulent mortgage, charging tenants up to £820 a month.

The apartment building in Dartford where she lived for a number of years while defrauding Bexley Council of more than £114,000 by claiming to be homeless.

The court heard that Owoeye first came to the UK from Nigeria in 2002. She then made a fraudulent mortgage application, claiming she was working in the software industry and earning £41,000 a year.

She moved out four years later and lived with a friend. In 2013 she approached Bexley Council for support, claiming to be homeless.

She told staff that she had been evicted by a landlord, and was re-housed in Dartford and then Crayford. But her lies were uncovered in January last year when the tenant at her Erith home approached the council to make a complaint.

Judge Mann praised the investigators who uncovered Owoeye’s fraudulent behaviour. While Owoeye is in jail, officials will investigate her right to remain in the UK on her release.