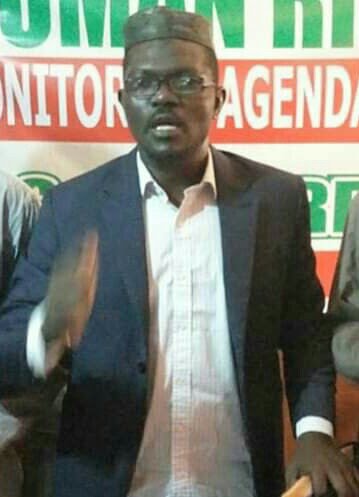 HURMA Calls For National Confab To End Insecurity, Others

A human rights organization, Human Rights Monitoring Agenda (HURMA) has called on President Muhammadu Buhari and All Progressive Congress led-government to urgently organise a national conference, as a mean of stopping Insecurity, killing and other forms of injustices in the country.

The group also called on the chairman of the Independent National Electoral Commission (INEC) Professor Yakub Muhmud, to quickly resign from office due to what the group called ‘undemocratic and unconstitutional agenda’ which it said has eroded confidence reposes on him.

HURMA’s Executive Director, Comrade Isiak Olaitan Buna, made the call during a press briefing on the state of the nation, at the group’s National Secretary, Lagos, today.

Speaking at the briefing Comrade Buna said: “We have decided at a recent meeting to address this press conference over the several problems building up on daily basis in the Nigerian environment and also seriously concerned about its adverse effects on the poor, oppressed and exploited masses whose interest we genuinely represent across board irrespective of colour, race or religion within and outside Nigeria.

“HURMA is convinced that if few highlighted issues are promptly addressed by the government from the federal level to the local level, Nigeria would be back to a peaceful and desirable home for all. Without mixing words, the general challenges presently threatening our nationhood, from insecurities to others, cannot be divorced from inequity and injustice at its foundation.

“No doubt part of the reasons Nigeria has remain underdeveloped and characterized by abject  poverty could be traceable to the mismanagement of the economy over the years and corruption by previous regimes in the country which called for popular demand by the Nigerian people for a change. Nigerians therefore choose the present regime under the leadership of President Muhammad Buhari, it is however disheartening that no significant change as desired by the people has been recorded, even after almost half a decade in power.

“HURMA believe that it is not too late for President Buhari regime and the APC led government to redeem its dwindling image and honour so as to change the perception that open gangsterism is officially sanctioned and legalized under the  present leadership. HURMA hereby request for urgent convocation of a National Conference on Security to address the challenges confronting us as a Nation”.

HURMA Executive Director also attributed broad economic gap between Nigerians, lack of transparent and accountability as another root cause of the nation’s crisis.

“We have equally strongly observed that root of various crises  is the broad economic gap between the members of the ruling class and the ruled, the have and the have-not. The supposed people Representatives have turned into oppressors with a power they derived from our collective wealth.

“There is lack of transparency and accountability which is central to tenet of good governance. The rights to know as constitutionally guaranteed is denied citizens and whoever that insist is threatened by state instrument of coercion which include the police, DSS, Army etc and manipulation of Courts processes. One of our Comrades, Agba Jalingo is presently incarcerated for asking questions around accountability from his state governor in Cross Rivers State.

“The affected state governor among others should be aware of implication of such alienation of   the grassroots and youths from the political decision making processes. HURMA therefore call for the unconditional release of Comrade Agba Jalingo, Zakyzaky among others whose rights and freedom are being violated.

“Finally, in the light of the above stated facts, the only alternative in any democratic space is a search for a genuine alternative party that would serve as a tent to provide shelter for the homeless majority and voice of the voiceless”.

“The party of the oppressors and moneybags may not be able to adequately represents and galvanized the wishes and aspirations of the Nigerian people effectively. INEC is now being used as an instrument to close the democratic space for a genuine alternative party to develop.

“We finally call for the resignation of the INEC Chairman for caving in into undemocratic and unconstitutional agenda which has eroded our  confidence in him. Professor Yakub Mahmud must resign with immediate effects and INEC must embark on restoration of the constitutional rights of the affected parties to participates without any restriction in electoral processes”.