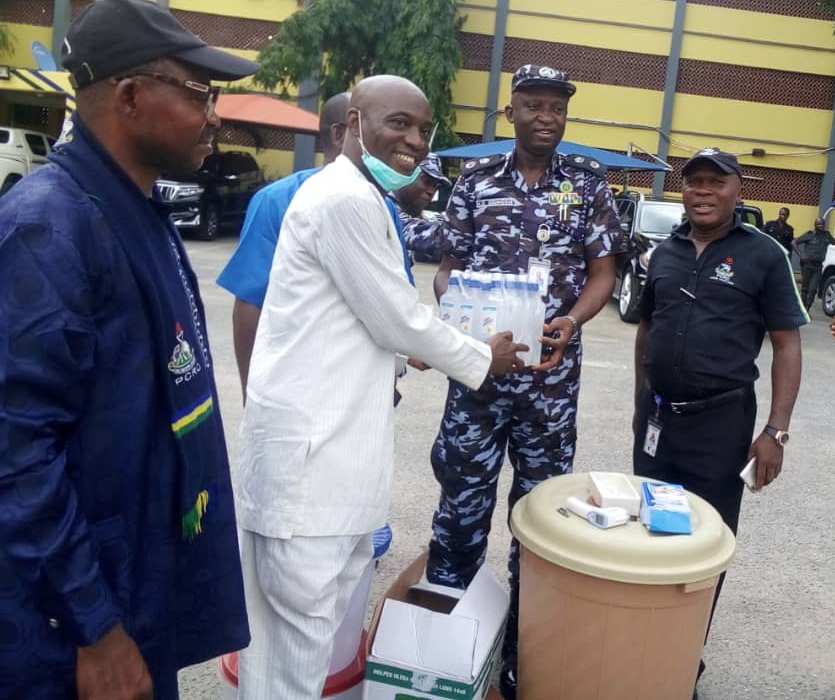 As parts of steps to contribute in stopping spread of Corona Virus, also called COVID-19, among the officers of Lagos Command of Nigeria Police Force, the State’ Command of Police Community Relations Committee (PCRC), has donated some preventive materials worth N3 million to the Lagos Command, 13 Area Commands and about 100 Police Divisions throughout the State.

Some of the materials donated on Monday, includes: Infrared Thermometer, Wash Hand Buckets Fixed with Taps and Other Hand Washing Materials, Hand Sanitizers, Hand Gloves, Face Masks and others.

Presenting the materials, Chairman of PCRC, Apostle Kehinde Adewale Showemimo, said the gesture is part of PCRC community Policing input for the safety of the Police Officers and men while carrying out their constitutional duties. Adding that the COVID19 preventive materials will also be replicated by the PCRC in all the police formations across the state  command (Divisions & Area Commands).

Apostle Showemimo also stressed that the PCRC in Lagos State embarked on the project both as part of its welfare obligations for the officers and to forestall any untoward circumstances as recently experienced by the State of New York in the U.S. where over 230 Police Officers were infected by Coronavirus in the course of their duties especially as part of the first responders.

He urged all Lagos residents to be vigilant, cooperate and support efforts and measures to stop the spread of COVID19 pandemic.

Receiving the items, the State Commissioner of Police, Akeem Odumosu and Mr. Muhammad Alli, a Deputy Commissioner in-charge of Operation and  Adminstration, commended the Committee for the items.

CP Odumosu assured the Committee the the items will be distributed among the men and officers of the Command.