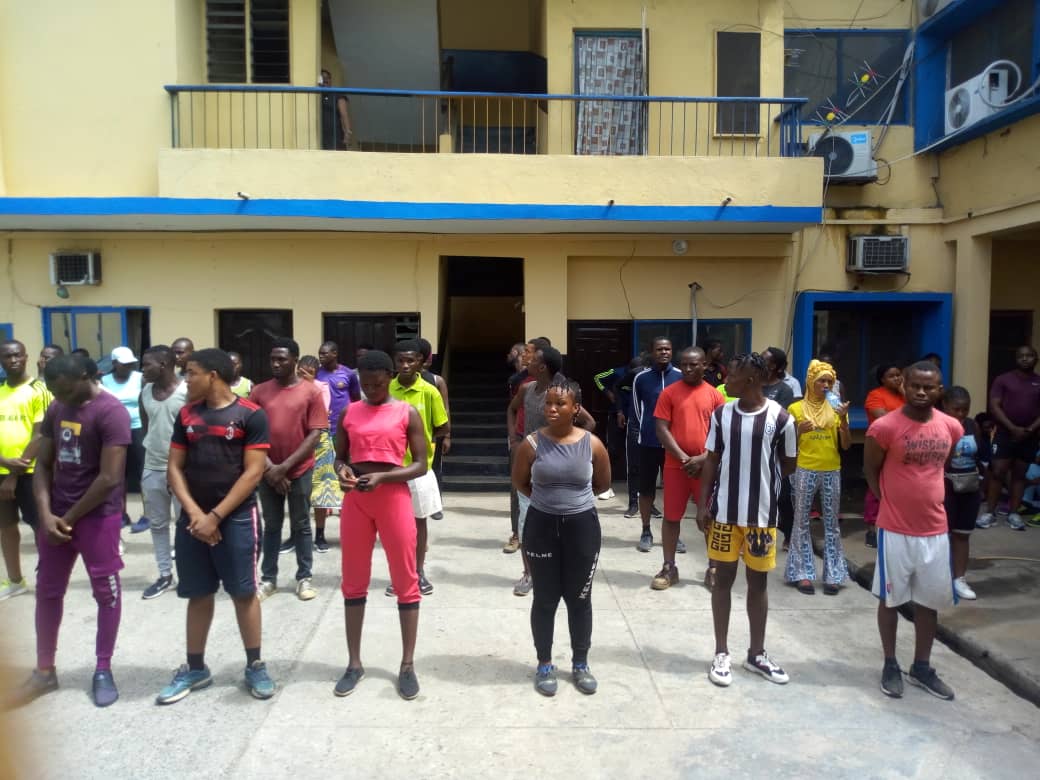 Some Of Those Arrested For Disobeying Social Distance Directive

Chief Magistrate Yewande Aje-Afunwa approved the withdrawal, following the submission of Lagos State Director of Public Prosecutions (DPP), Yhaqub Gbadebo Oshoala confirming that the Gbadamosi, his wife and Marley had accepted and complied with the State’s conditions to withdraw the charges against them.

The governor of Lagos State,Babajide Sanwo-Olu had sometime in March directed Lagosians, religious bodies, families, residents, academics, professionals and other categories of residents to desist from any gathering ofover 20 people as part of measures to curtailed the spread of the COVID-19 pandemic.

The defendants were slammed with a four -count charge of attending birthday party organised by Nollywood actress, Funke Akindele Bello a.k.a Jenifer and her husband, AbdulRasheed Bello known as JJC Skillz.

The state government had however charged them for breach of Cessation of Movement and stay at Home Order made by the President of the Federal Republic of Nigeria contrary to Regulation 1 (1)(2) of the Covid-19 Regulation 2020.

The defendants were also charged for breaching social gathering contrary to Regulation made by the Governor of Lagos State under Regulation 8(1)(a), (b) and 17 (1)(i) & 17 (2) of the Lagos Infectious Disease (Emergency Prevention).

Though, the defendants were not arraigned on the alleged charges, when they were brought before the court on Wednesday.

At the resumed hearingnof the matter today, the Lagos State Director of Public Prosecution (DPP)  Yahqub Gbadebo Oshoala, told the court that the defendants have met the conditions given by the State Governor.

He said, “the three defendants have issued us a letter of appology and an undertaken to comply with the conditions set by the state.”

All the defendants in their letters of apology promised to be law abiding citizens.

The counsel also told the court that they undertook “to be good behaviour and support the Lagos State campaign against the pandemic called Covid-19 by using their position as a renowned artiste and politician to urge the youth to stay  at home and keep the required distance as spelt out by the Governor Directives.

Part of the conditions of Naira Marley is to join the Lagos state campaign against the spread of COVID-19 vide making a free audio visual publication towards the campaign while Gbadamosi to be supervise during the 14 days self-isolation by the state Ministry of Health.

However, while ruling on the application to withdraw charges, orally made by the DPP on behalf of the Attorney General and Commissioner for Justice, Mr Moyosore Onigbanjo (SAN), Magistrate Yewande Aje- Afunwa held that the application brought pursuant to section 71 and 73 of the Administration of Criminal Justice Law (ACJL) 2007 and pursuant to the fact that the defendants have complied for purpose of obey law.

“The unchallenged application of withdrawals of charge no MIK/A/44/2020 against Afeez Fashola, Babatunde Gbadamosi and Folashade Gbadamosi, the leave is hereby granted to the Attorney General to withdraw the charge by this honourable court. The three defendants is hereby discharge.”

Magistrate Aje-Afuwa therefore commend the AG, the DPP, the senior advocates and the police for the noble way of handling the case. She also commend the defendant for taking the path of restorative justice.

In a related development, the office of Directorate of Public Prosecution (DPP) today, arraigned over 200 violators of stay at home directive of Lagos State Government.

The Violators were arraigned before a Lagos State Special Offences Mobile Court in Panti, Yaba, Lagos.

The violators were arrested by the Officials of the Lagos State Taskforce, in over 15 areas of the State, which include: Yaba, Agege, Ogudu/Ojota and Iju, while they were either  jogging, cycling or loitering.

They were arraigned on a count charge before two Magistrates; Mrs Makanju Oshodi and Mr Nurudeen Layeni.

When the charge was read to the violator’s, they all pleaded guilty.

Representing the offenders, a counsel from the Office of Public Defender, Mr. Oyedeji urged the court to temper mercy with justice while pointing out that they were first time offenders who has realized there mistakes.

The state counsel, however, asked the court to convict them accordingly under the public health law of the State.

After listening to the submissions from counsel, the court pronounced that for violating the Social Distancing Directives which are contrary to Regulation 1(1) of the COVID-19 Regulations which is punishable under Section 5 of the Public Health Laws of Lagos State 2015, the offenders should pay fines ranging from N5,000 to N10,000 to the Lagos State Government and were ordered to immediately commence a two-hour community service.

15 vehicles were also impounded by the officials of Lagos State Transport Management Authority (LASTMA) for lack of clearance to ply the road during the lockdown.

Addressing newsmen after the proceedings, the Coordinator Mobile Courts, Lagos State Ministry of Justice,  Mrs Arinola Ogbara-Banjoko said that all juvenile offenders and persons with special needs that were apprehended were not arraigned.

She said that they were to carry out community service as punitive measure.