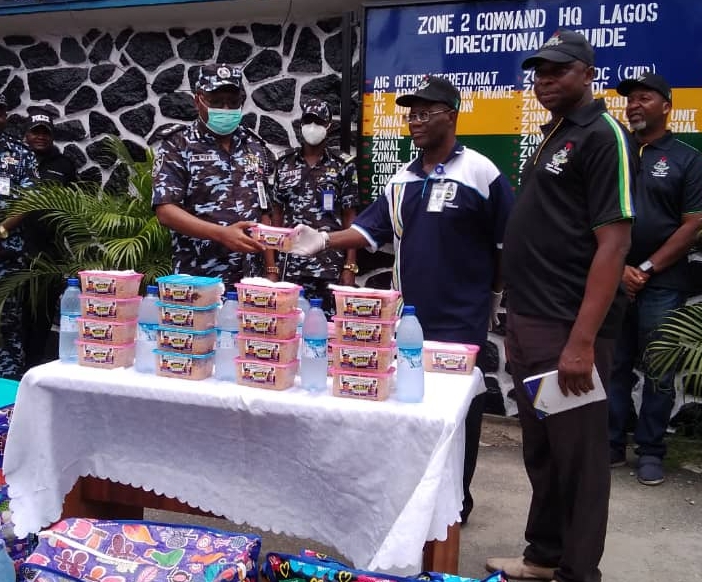 In fulfilling promise made to support police officers during the lockdown of the country, occasioned by the deadly Corona Virus Disease codenamed COVID-19, the Zone 2 Command of Police Community Relations Committee (PCRC) has launched a feeding scheme for the personnel within the Zone.

Launching the feeding scheme at the Zone 2 Headquarters of Nigeria Police Force, Onikan, Lagos, on Friday, Alhaji Bashiru R. Balogun, Chairman PCRC Zone 2 Command, said the scheme was aimed at providing food for police personnel in Lagos and Ogun States who gave their lives and time in making sure that the Federal Government COVID-19 directive to safe life is effectively implemented and lockdown is strictly complied.

Alhaji Balogun also stated that the scheme was to remind the police personnel in the Zone of PCRC’s commitments of standing by them in the fight against COVID-19.

The PCRC Zonal Chairman also thanked Mr. Ahmed Iliyasu, the Assistant Inspector-General in-charge of the Zone, for his fatherly and unwavering supports to the cause of the Committee.

“The feeding scheme we are launching today, is to aimed at providing foods for police personnel who dedicated their lives, time and energy in ensuring that the lockdown and stay at home directive of the federal government is strictly complied.

“By this scheme, we want to remind the police personnel in the Zone of our commitments to stand by them in the fight against COVID-19”, Balogun stated.

Alhaji Balogun also said while the next phase is been planned and awaited, thanked all the Committee’s Zonal leadership, members who contributed to the success story, while also commended AIG Iliyasu for always ready to assist the Committee.

Flagging-off the scheme open, AIG Iliyasu, expressed his gratitude on behalf of his men for the PCRC food support, while stated that the donation will go a long way in boosting the moral of his personnel at this critical period.

After the flaged-off at the Police Zonal Headquarters and the the approval of the scheme by the AIG, the food was given to the police personnel found on duty at Apongbon, Costain, Ojuelegba, Anthony and Ketu respectfully.

Prior to the launching of the food scheme of Friday, Alhaji Balogun led-committee had paid unscheduled visit to some Area Command of the Force on Thursday, in order to know how they were enforcing the lockdown directive.

Area Commands visited by the Committee were Lion Building, Area ‘A’, Apapa ‘B’ and Surulere Area ‘C’, under the leadership of ACP. Bode Ojajuni, ACP. John Ali-Zongo and ACP. Tijani Fatai.

All the three ACP had told the Committee that the lockdown directive in their respective Command had been fully complied with.