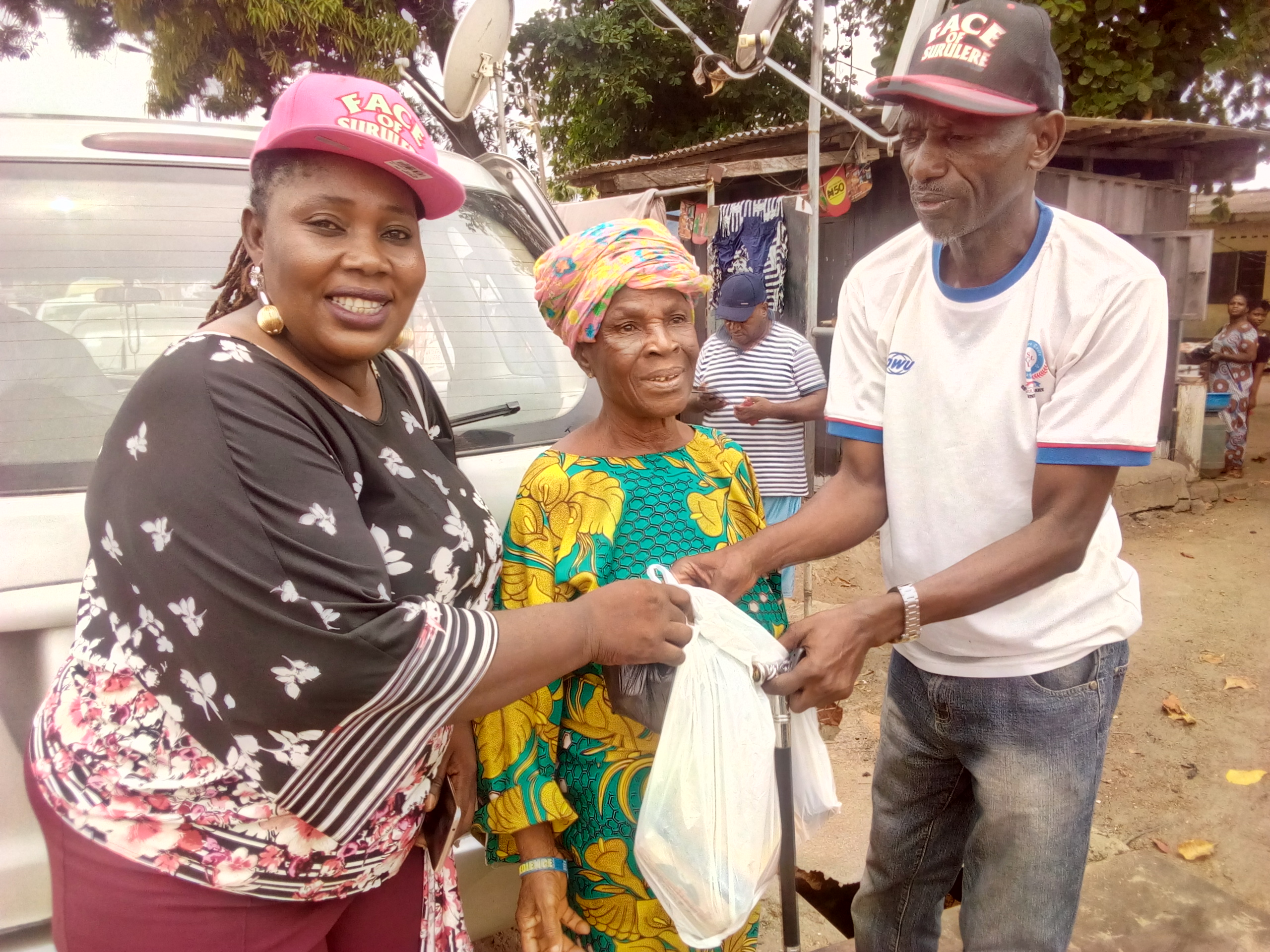 Mr. Disu (right) President, Face of Surulere, being assisted by Alhaja Olugbbodi, his deputy to present food donation to an aged woman on Olawale Dawodu Street, Surulere, Lagos on Sunday

A Surulere-based Non Governmental Organization (NGO) Face of Surulere, has donated food items to the aged people in Surulere Local Government Area, Lagos State, as part of the group’s contribution toward ensuring that the lockdown directive of the Federal government is not breached.

The group which comprises of bonafide indigenes of Surulere sons and daughters both in Nigeria and diaspora, also said the donation became necessary, after considering the economic effect of the lockdown directive and stay at home order of the government on the elderly ones in the area.

Speaking on the donation, Mr. Fatai Adeshina Disu, the group’s president in Nigeria, said is one of the numerous ways of paying back to their ‘fathers and mothers’ who natured them in the community, especially, during this hard time.

Disu popularly called Oye also promised that the outreach which is slated for Sunday and Monday, will reach all those who are between the ages of 65 and above.

Disu while admonished Surulere residents especially the youths in the area to say no to all forms of violence, which he said was the group’s motto, also charged other groups, and individuals corporate bodies operating in the community, to assist the aged one in this hard time.

Also speaking on the outreach, Disu’s deputy, Alhaja Olamide Sikiratullahi Olugbode, said if other groups can follow their footsteps, it will go along way in putting smile to the faces of the aged ones.

Olugbode equally charged the residents of the area and all Lagosians to strictly comply the lockdown directive and stay at home order to avoid contracting the deadly disease.

A recipient of the group’s donation, 82 years old Pa. Olufunsho Marcus, said  reaching out of the group to the elderly is keeping the spirit of togetherness, which he said was imported from Lagos Island to Surulere.

“What the Face of Surulere doing today remind me of how we used to be each other’s custodian on Lagos Island in the olden days, if anything happened to anyone will all come around to assist.

“I really appreciate them and pray that God in his infinite mercy will be with everyone of them for remember us in this hard time”.

Also speaking, the Chief Imam of Oladimejj mosque, 95 years old Alhaji Sheu Sanusi, who described the donation as timely also commended all members of the group for having old people in their mind.