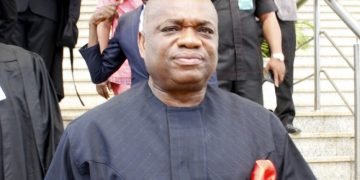 BREAKING: Kalu Still In Prison, No Order To Release Him –Jailor

A former Governor of Abia State, Mr. Orji Uzor Kalu has remained in Kuje Prison because the judgement of the Supreme Court does not affect him, The Nation newspaper reports.

The Apex Court, it was learnt, did not issue any order for Kalu’s release because he did not file any application for such.

The judgement only covers the Appellant, Mr. Ude Jones Udeogu, who challenged the propriety of a Court of Appeal Judge, Justice Mohammed Idris to try him.

The Comptroller-General of Nigeria Correctional Service Mr. Jaafar Ahmed, has also refused to release Kalu because there was no any order from the Supreme Court.

It was learnt Kalu may have to approach the Court of Appeal, where he has a pending matter, to ask for his release following the dismissal of the judgement of the Federal High Court, Lagos by the Supreme Court.

According to a copy of the judgement exclusively obtained by THE NATION, the Supreme Court clearly stated that the judgement relates only to the Appellant.