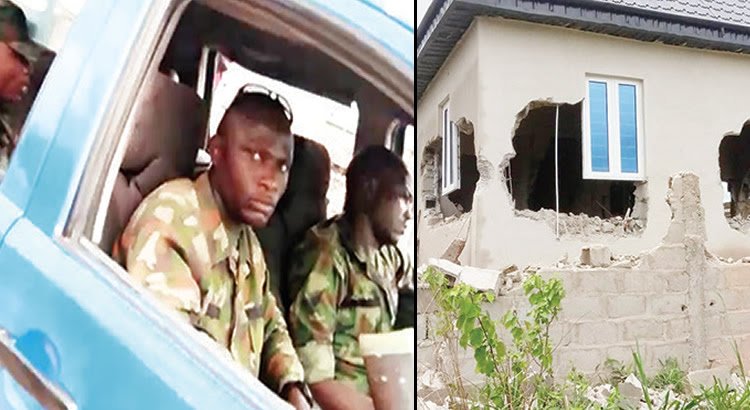 The Air Force Men And the Building Allegedly Demolished By Them Photo, The Punch

A Nigeria lawyer, Mr. Yinka Campbell, has claimed that the structures that were demolished in Aboru area of Lagos State, recently, belong to alleged land grabbers, who forcefully entered the land.

The lawyer stated this, while reacting to a national newspaper report, where he was alleged to have sponsored some Air force men and hoodlums to demolish some buildings in the community.

Punch newspaper had on last Monday, May 12, 2020, reported in a story titled “Air Force Men Lead Hoodlums To Demolish Building’ mentioned the lawyer’s name, as the alleged sponsor of the Air Force men and the hoodlums, who allegedly demolished the some structures in the area.

Punch also reported that the Airforce men led by Staff Sergeant T. A. Oyewo, and the hoodlums allegedly acted on the instructions of one Mr Yinka Campbell.

The newspaper reporter also stated that two people, Adekunle Williams and Benjamin Akinsanya, that spoke to him on the demolition conspicuously mentioned Mr. Yinka Campbell, as the man behind the act.

The newspaper however reported that Mr. Campbell denied responsibility for the demolition but said those who carried it out acted with his full backing, because his firm had been granted possession of the land.

Clearing his name of allegations, Barrister Yinka Campbell, in a rejoinder to Punch newspaper, which a copy was availed to newsdishng.com, stated that the newspaper hurriedly concluded that he engaged hoodlums without enquiry the source of land in question and that the reporter failed to further demand his own side of the story with any documents of title in support before publication of the story.

He also stated that those that called themselves the landlords that spoke with the reporter, Mr. Benjamin Adedimeji, a surveyor and Akinsanya and Adekunle , a lawyer, were the alleged land grabbers, sponsoring hoodlums, OPC, NSDC, to demolish his client’s buildings on the land.

The lawyer also stated that his chambers became entitled to about 17 acres of land in Aboru village, in lieu of cash payment, for the team of lawyers that handled a suit marked FHC/L/CS/629/98, that set-aside acquisition of the said land by the Federal government of Nigeria.

Barrister Campbell, who equipped himself with several court judgments in favour of his clients, who were Chief Salawu Bamgbopa; Rasaki Akinde; Nojimu Alade Akinola; Akeem Akinola; Akanni Sanni and others, stated that the reporter ought to have visited the land and enquire from the Community Development Association (CDA) and other genuine landlords who are his client’s vendees (buyers) before publication as its expected of every journalist in balancing their story.

Barrister Campbell stated that the only court document that one of the alleged land grabbers, Akinsanya, was relying on was a High Court’s interlocutory ruling appealed by his client, for not dismissing distracting ‘cover-up suit’, against his own vendors, who are actual owner of the land, for disturbing him on his alleged ownership of same land.

He added that the documents, which is an agreement between the alleged land grabber, Mr Akinsanya and the family he claimed to have allegedly gave him 124 acres of the Aboru land in question in 2002, did not cover any land in Aboru, rather, the said family described themselves to be of Igoke Township, Oke-Odo, Lagos State, not Aboru.

The lawyer therefore called on Punch newspaper, to report his own side of story divide, with particular consideration of the consequential remedial right, granted to  persons, like his clients, in peaceful possession of land.