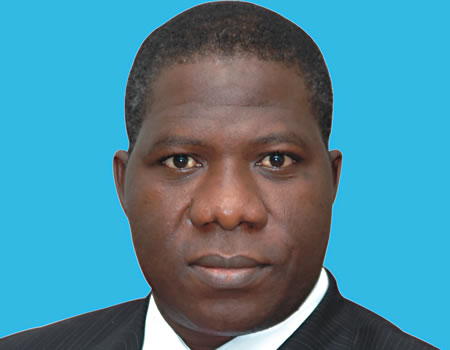 This is not the best moment for Mr. Bamidele Opeymi Michael, popular called MOB, as all judicial steps taken to stop Assets Management Corporation of Nigeria (AMCON) from prosecuting a debt recovery suit against him had failed both at Federal High Court and Court of Appeal.

This was sequel to struck out of his appeal a Lagos Division of Court of Appeal, challenging an exparte order granted by Justice Saliu Saidu led-court, which in the interim, forfeited some of his shares to AMCON and freezing of his bank accounts pending the determination of debt recovery suit against him .

While the appeal was pending, Senator Bamidele filed a stay of proceedings before Justice Saidu’s court against AMCON’s debt recovery suit against him.

However, Justice Saidu, on Tuesday, equally dismissed Bamidele’s stay of proceedings application, on the ground that the appeal was ‘antithecal to speedy hearing of a case’.

“A Stay of Proceedings is of a very serious nature that a Court of Low does not grant as a matter of course. This is because it delays the trial process of the main matter, at times inordinately. Stay of Proceedings is antithecal to the speedy hearing of a case. Before it can be granted. there must be a compelling and inevitable circumstance. Stay of Proceedings cannot be granted to give a recess to the lower Court 0nd Counsel. It is not granted to enable one of the parties put right the deficiencies of his case or plan strategies to overreach the adverse party. See the case of Caribbean Trading and Fidelity Corporation VS. NNPC (1991) 6 NWLR (Pt. 197) 350 at 360, Paras. F-H.

“This Court will not allow the interruption of this case by the 1st Defendant’s Interlocutory Appeal. Consequently, I refuse to Stay Proceedings in this Case and the Motion on Notice filed on the 7th of May 2019 is hereby struck out”, Justice Saidu ruled.

Further hearing of the suit has been adjourned till September 29, 2020.

AMCON had sometimes in 2018, dragged Bamidele, an All Progressive Congress (APC) senator, representing Ekiti Central Senatorial district, before Justice Saliu Saidu, due to his failure to liquidate loan sum of N201 million which had increased to N511. 3 million, obtained from the defunct Oceanic Bank Plc and bought over by Nigeria’s debt recovery agency (AMCON).

In the debt recovery suit, AMCON in its statement of claimed in suit number FHC/L/CS/588/2018, filed before the Court, through its lawyer stated that upon request by the Senator, the defunct Oceanic Bank International Plc through a document headed ‘offer of margin facility’, granted the Senator and overdraft of N210 million on October 10, 2007, at the interest rate of 18 percent par annum, for the purpose of buying shares, and the tenor was 12 months.

AMCON stated upon maturity of the loan facility, the Ekiti born Senator, refused, failed and neglected to liquidate the loan leading to the accumulation of interest over times of interest and that as at January 1, 2011, the principal facility and interest stood at N307, 779, 998.80 million.

AMCON further averred that due to continuous accumulation of interest, the defendant’s indebtedness to it as at November, 2017, stood at N478, 170,566.62 million. While adding it instructed its counsel, Godwin N. Chigbu, to write the Senator a demand letter through the addresses he provided with the bank.

It stated that despite the demand letter been delivered to the defendant, he still refused and neglected to pay the demanded sum. Adding that as at March 31, 2018, the Senator’s debt stood at the sum of N511, 311, 895. 80 million.

Due to the alleged failure of the Senator to pay back the indebtedness, AMCON consequently, asked the Court for an order directing MOB to pay it the sum of N511. 311, 895. 62 million being the debt owed since March 31, 2018.

However, in Senator Bamidele in his statement of defence and counterclaimed filed before the court by one of his counsel, Precious Orotma (Miss) said the alleged debt arose because of banker-customer relationship between him and the defunct Oceanic Bank. Adding that the bank sometimes in 2007, through its team of investment bankers and asset managers approached and invited him to partner with bank for the purchase of stocks and shares.

The lawyer turned politician, also stated that the as The Defendant states that the Bank and its subsidiary company now explained to him that the Bank would provide the s m of N 210, 000, 000.00 (Two Hundred and Ten Million Naira Only) inform of margin facility while the Defendant would provide an equity contribution of 30% plus security in the sum of N90, 000, 000.00 (Ninety Million Nair Only) worth of shares and cash.

The former Commissioner in Lagos State, states that the Bank and its subsidiary company had represented to him that his contribution would be merged with that of the Bank to finance the purchase of shares and stocks in which the purchased shares would remain in the custody of the Bank which shall also manage the investments through its asset management, this known as Oceanic Capital Limited and Oceanic Asset Management (OAM).

The Defendant stated further that Oceanic Bank did not take reasonable care in ensuring the performance of the contract and observe compliance with all terms and conditions of their agreement in relations to the transaction, as it failed to monitor the stock market, advise the him accordingly and even timeously and appropriately sell down as it was obliged by the margin facility agreement.

The Senator stated that the defunct Oceanic Bank Nigeria Plc, fraudulently induced him into the margin facility agreement as it misrepresented, concealed and or suppressed fundamental facts as to its requisit knowledge, skills and expertise in managing the investment in a win-wi situation while offering the products to him. Consequentlyrthe breach of the margin trading facility agreement, fraudulent misrepresentations and mismanagement of the Defendant’s account by the Bank occasioned huge losses to him.

The Defendant stated that the last he heard from the Oceanic Bank International Plc, concerning the mismanagement of the joint investment was the visitation of its delegation to his residence before it was taken over by the Eco Bank Plc. on the 25th October, 2011.

The Defendant states that the Oceanic Bank International Plc. through-out the period of year 2007 up to the time it was acquired by Eco bank Plc, did not approach him for the repayment of the margi facility because it knew that they we were joint investors and that he did not take and could not have taken a single Kobo out of the Bank as it was not like a conventional loan facility where a Borrower could withdraw or draw down from the account.

The Defendant stated further that the Bank did not and could not approach him because it knew that it had mismanaged the joint investment as a result of its failure to use its professional skills and expertise to manage, control and operate the margin facility.

He stated that it leaves much to be desired that AMCON, who claims it had purchased the purported debt from the defunct Oceanic Bank International Plc. as an asset since 1st January, 2011, could wait for several years before it notified him of the situation. And that he was eventually able to speak with one Mr. Godwin Chigbu (AMCON Counsel) on telephone number: 07035971885.

The Defendant states that while waiting for e meeting to explore amicable resolution of the issues surrounding he mismanaged margin facility as promised by the Claimant’s Counsel, the Claimant’s Counsel sneaked into this Honourable Court to file a frivolous Suit against him with an ulterior motive to confiscate his fund and properties and with a view to ultimately blackmailing, harassing and forcing him into negotiation.

Consequently, Senator Bamidele seeks a declaration that Eco Bank of Nigeria Plc. is in breach of the margin facility agreement dated October 10,  2007, as a result of its failure to use its professional skills a d expertise to property disburse, invest, manage, control and create the margin facility which occasioned huge losses to him.

He further asked for an order directing Eco Bank of Nigeria Plc, to pay post-judgment interest at the rate of 10% until judgment is liquidated.

Justice Saidu had on February 4, 2020, joined Ecobank of Nigeria Plc, as defendant to counterclaim in the suit.