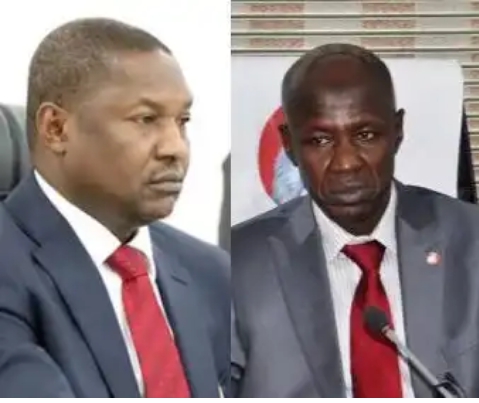 Centre for Human and Socio-economic Rights (CHSR) has joined its voice in calling for the removal of Mr. Ibrahin Magu, as the Acting Chairman of the Economic and Financial Crimes Commission (EFCC), following allegations of diversion of recovered loots, insubordination and gross misconduct made against him by the Attorney-Generalpf of the Federation and Minister of Justice, Mr. Abubakar Malami.

It would be recalled that CHSR in a world press conference on Tuesday, had called on President Muhammadu Buhari to represent Magu to the Senate of Ninth National Assembly for confirmation or appoint another person to replaced him, following the inability of Eighth Senates to confirm him.

It would also be recalled that Mr. Malami, the Nigeria’s AGF and Justice Minister, recently recommended to the President Buhari, to remove and prosecute Magu over allegations of diversion of looted funds, insubordination and gross misconduct.
In backing Malami’s called for Magu’s removal, CHSR in a release co-signed by Comrade Alex Omotehinse and Comrade Agbedina Omokehinde, both its National President and National Secretary respectively, stated that Malami being the number one law officer of the country and same as the Attorney-General of the Federation, whose EFCC under his Supervision.

CHSR in a statement issued today and captioned: “Magu should step aside now as the acting chairman of EFCC, to give way for a proper investigation on the weighty allegation against him by the AGF”, said by doing, the ……

The statement reads in part; “the attention of CHSR has been drawing to the weighty allegations leveled against the EFCC acting Chairman Mr. Ibrahim Magu by the Attorney General of the Federation (AGF) and Minister of Justice Mr. Abubakar Malami SAN.

“It was widely reported “in a memorandum sent to the President by the Attorney General according the THISDAY report on Thursday, the AGF made some recommendations that anchored on several grounds raging from diversion of recovered loot to insubordination and gross misconduct by Mr. Ibrahim Magu.

“It was reported that despite the weight of the AGF allegations against Mr. Ibrahim Magu the presidency has declined to set up a probe panel that will look into the veracity of the allegations and make appropriate recommendation.

“Although, we are aware that Mr. Magu has survived several and previous allegations because of his loyalty to the presidency, but this recent disturbing revelations exposed by the AGF via his letter to the President that has been reported to have contained about 22 weighty allegations that requires President Buhari decision on whether or not to send Magu’s name to the senate for confirmation or replacement.

“The Attorney-General has alleged accounting gap nor discrepancies of figures concerning the recovered assets, it was also reported that the AGF states that Mr. Ibrahim Magu was not transparent enough and also accused Magu of blatant display of arrogance and insubordination to him as the supervising Minister of the EFCC.

“The EFCC acting Chairman Mr. Ibrahim Magu was also accused of singlehandedly selling most of the recovered assets without the knowledge of anyone.

“Mr. Magu whom the President  appointed as the acting Chairman of the EFCC since on the 9th day of November 2015, and remember that the 8th Senate rejected Magu’s confirmation as a substantive Chairman of the EFCC twice, which prompting him to remain the INTERIM head of the anti-graft agency.

“However, when the presidency insisted on Magu be confirmed, the 8th Senate demanded for the reversal of a damning security report on the EFCC from the DSS in which the Senate then had cited as the reason for Magu’s non-confirmation.

“Based on this reported compelling and weighty allegations from the office of the number one law officer of the country and same as the Attorney-General of the Federation who is also the Supervising Minister of the EFCC, the non-reversal of a security report on EFCC, and coupled with the fact that there has been agitations against same person.

“We hereby demand that Mr. Ibrahim Magu step aside with immediate effect as the Acting Chairman of the anti-graft agency, to give way for an independent and impartial investigation on the allegation against him by the AGF, while we also call for a transparent panel of enquiry to be set up by Mr. President Muhammadu Buhari to investigate these weighty allegations and make their recommendation known to the public”.