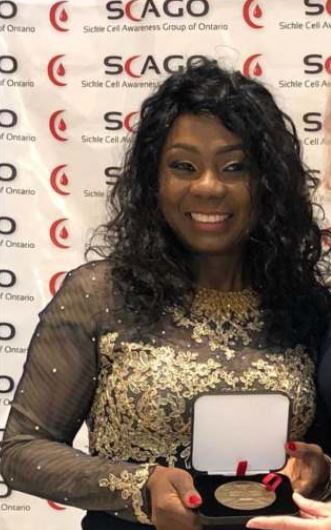 Mrs. Lanre Tunji-Ajayi, with one of her numerous awards

It’s been a season of honours for a couple of years for frontline Canadian-Nigerian’s Sickle Cell Disease (SCD) advocate, Lanre Tunji-Ajayi, as she received a letter for an award and recognition from the Canadia’s Governor-General, Her Excellence, the Right Honourable Julie Payette.

Right Honourable Payette in her letter signed and dated June 29, 2020, nominated Mrs. Tunji-Ajayi for a meritorious Service Medal, for her advocacy work in the area of health.

Payette’s letter states, inter alia, that the Nigerian-born Canadian citizen is now to have the letters M.S.M after her name. This marks a crowning recognition of Mrs. Tunji-Ajayi’s SCD advocacy spanning nearly two decades.

The Meritorious Service Decorations (Civil Division) celebrate Canadians who have performed an exceptional deed or activity that brings honour to Canada. They recognize remarkable contributions in many different fields of endeavour, from advocacy initiatives and health care services, to research and humanitarian efforts.

Mrs. Tunji-Ajayi’s seeds for global SCD advocacy were sown in Nigeria, what with having a younger brother living with sickle cell anaemia. By the time her brother, an Electrical Engineer with the then General Hospital, Ikeja, passed away, Lanre had moved to Canada to join her husband, Elder Timothy Tunji-Ajayi.

She quickly established the Seed of Life Philanthropic Organization, which later morphed into the Sickle Cell Awareness Group of Ontario (SCAGO). Later, the distinguished SCD advocate helped found the Sickle Cell Disease Association of Canada (SCDAC), and served as its pioneer President/CEO.

In 2017, she received the Canadian Senate 150 Award in recognition of her work around Newborn screening and the enactment of June 19 as National SCD Awareness day.

In 2018, with her husband in attendance, Mrs. Tunji-Ajayi received an award as one of 100 Most Accomplished Black Canadian Women.

From Canada, Mrs. Tunji-Ajayi moved to the global stage with the launch of the umbrella body for sickle cell organizations worldwide. The Global Alliance of Sickle Cell Disease Organizations (GASCDO) was launched in February 2020 in The Netherlands.