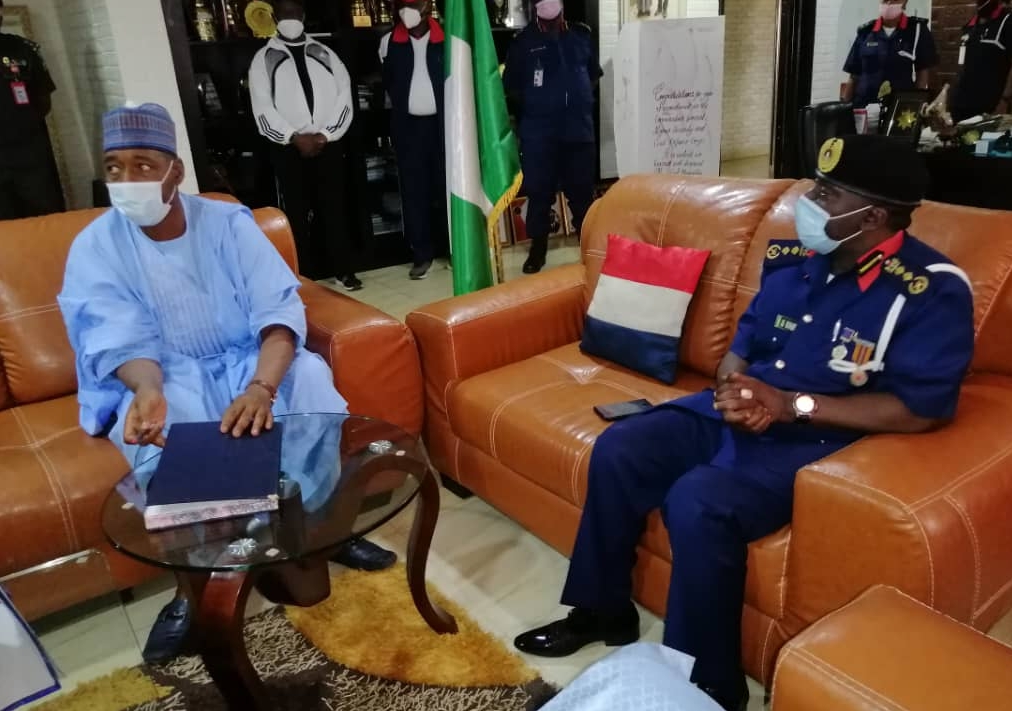 Borno State governor, Professor Babagana Umara Zulum has commended the Nigeria Security and Civil Defence Corps (NSCDC), for its doggedness and commitment to finding lasting solutions to banditry, kidnapping and herders-farmers conflict in the State.

A statement issued and signed by the
Media Assistant to the NSCDC’s Commandant General, Mr. Ekunola Gbenga, stated that Governor Zulum made the assertion on Wednesday, at the Corps’ headquarters, Abuja when he visited the Commandant General, Abdullahi Gana Muhammadu.

The statement stated that Governor Zulum, also used the Wednesday’s visit to thanked Muhammadu for the training and deployment of agro Rangers in the state.

The statement stated that Governor also acknowledged the supports of the Corps to the people and the government of Borno State and extended an invitation to the Commandant General to visit the state for Field assessment.

It also stated that Governor Zulum expressed his increased support, cooperation and deployment of the Agro Rangers personnel to the state to ensure the successful completion of the war against herders-farmers conflict in the State while making a pledge to fund and accommodate the Agro-Rangers of the Corps.

The statement further stated that the pledged his continued support to the Civil Defence in the worthy services they have consistently rendered selflessly to the nation. He went further to affirm that the Grassroots Security Agency will not relent on their mandate to make Nigeria safe for all.

Governor Zulum was quoted to have said: “I wants to reiterate the need for
Civil Defence to recruit and train the indigenes for Community security services, this will help the nation in community Policing”.

Responding, the Civil Defence’s CG thanked the Governor for his dynamic approach to governance and his determination to finding an enduring solution to insecurity in the state. He used the opportunity to thank the governor for all his support especially to the Agro-Rangers deployed in Borno State.

He also applauded the Governor for pledging his support to the Corps and promised that all assistance rendered to the Corps will be used judiciously to attain lofty heights.