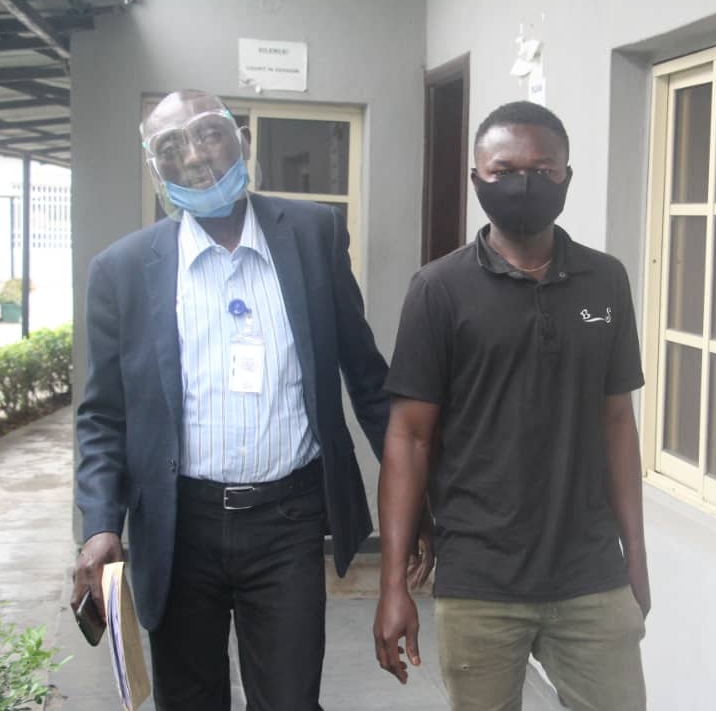 Mr. Anayo Being Led Out of Court After His Arraignment Today

Anayo was arraigned before the court presided over by Justice Rilwan Aikawa, by the Standards Organisation of Nigeria (SON), on a 12-count charge of producing substandard engine oil after rebranding them.

The judge ordered his remand in police custody pending the hearing of his bail application.

SON alleged that Anayo and others now at large, on July 15, 2020, at Mammy Market, Navy Town, Ojo, “did indulge in the production of adulterated/substandard Total and Mobil engine oil lubricants for public consumption”.

The prosecution said Anayo also “did engage in the distribution of adulterated/substandard engine oil of Total, Mobil, Naris Gold brand and other lubricants without lawful authority or licence”.

SON said the defendant “did deal in” the products  and “did adulterate” petroleum products to wit: engine oil of various brands “which are not of the quality, nature and efficacy expected of the products”.

In Count 7, the prosecution said Anayo offered to sell the substandard products to unsuspecting customers.

Count 8 alleges that Anayo affixed false labels on kegs of various sizes and unbranded cartons and claimed they were genuine Total and Mobil engine oil, which was “calculated to deceive unsuspecting consumers that the products are genuine Total or Mobil products”.

Count 9 reads: “That you Ibegbu Anayo and others now at large on or about July 15, 2020, at Mammy Market, Navy town, Ojo within the jurisdiction of this Honourable Court did apply a false trade descriptions of ‘Total and Mobil’ on various kegs of different sizes and unbranded cartons knowing them to be false, with intent that they may be used or acted upon as genuine”.

Prosecuting counsel Yusuf Lawan, a Senior State Counsel in the Federal Ministry of Justice, said the alleged offence is contrary to Section 465 of the Criminal Code Act of 2004 and punishable under Section 467.

The defendant pleaded not guilty to all the counts.

Justice Rilwan Aikawa ordered that Anayo be remanded in police custody pending the hearing of his bail application.

He adjourned until Tuesday for hearing.