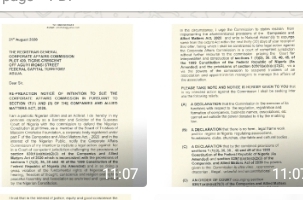 Copy of Omirhobo’s Letter To CAC

Omiorobo advised the management of CAC to expunged the new CAMA, in a pre-action notice to sue, dated August 21, 2020 and addressed to the CAC’s Registrar General, which a copy was made available to newsdishng.com

The preaction notice according to the lawyer, who is also a member of Malcolm Omirhobo Foundation,  is pursuant to Sections 17(1) and (2) of the Companies and Allied Matter Act, 2020.

The lawyer stated that his intention to sue CAC over the CAMA 2020, was due to its inconsistency with the provisions of sections 1, 36, 38 and 40 of the 1999 Constitution of the Federal Republic of Nigeria (As Amended) and due to gross violation of the fundamental rights of Nigerians to fair hearing, freedom of thought, conscience and religion and right to peaceful Assembly and Association as enshrined and guaranteed by the Nigerian Constitution.

The lawyer stated that failure of the management of CAC to reverse the new act, he will be asking a court of competent jurisdiction to declare that the Commission in the exercise of its functions with respect to the regulation, registration and formation of companies, business names, associations, etc cannot act outside the power donated to it by the enabling laws.

A declaration that there is no form of legal frame work and for regime in Nigeria regulating associations, foundations, clubs, churches, charitable and cultural bodies.

A declaration that by the combined provisions of Sections 1, 36, 38, 40 and as of the 1999 Constitution of the Federal Republic of Nigeria (As Amended) and section of the Companies and Allied Matters Act of 2020, the powers given to the Commission ultra vires oppressive, draconian, illegal, unlawful and unconstitutional.

An order expunging section of the Companies and Allied Matters Act of 2020 for being ultra vires, illegal unlawful and unconstitutional and for any such order that the court may deem fit.