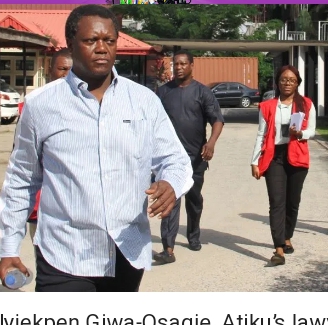 The Economic and Financial Crimes Commission (EFCC) today, closed its case against Mr. Uyiekpen Giwa-Osagie, lawyer to the former Vice-President of Nigeria, Alhaji Atiku Abubakar, and his brother, Erhunse Giwa-Osagie, who are standing trial before a Lagos Federal High Court, for allegedly laundering their sum of $2 million USD.

Uhiekpen, a senior lawyer in the law firm of Africa Law Practices (ALP) and his brother, Erhunse were brought before the court presided over by Justice Cbukwujekwu Aneke, on three counts charge bordering on conspiracy and money laundering.

The two Giwa-Osagies had pleaded not guilty to the charge.

During their trial, the prosecution had called its witnesses and tendered several documentary evidence, which were admitted by the court.

At the resumed trial of the defendants today, EFCC counsel, Uduak Kufre told Justice Aneke, that his Commission has closed its case against the Giwa-Osagies.

Following the submission made by the prosecutor, counsel to the defendants, Mr. Norrison I. Quakers (SAN), made oral application for ‘no-case-submission’, on behalf of his clients.

Quakers (SAN) whoever, told the court that he application for the ‘no-case-submission’ would be filed today same will be served on the prosecution.

He therefore urged the court for a short date, for the adoption of written addresses on the application.

By the consent of the prosecutor and defendants’ counsel, Justice Aneke, adjourned the matter till January 15, for adoption of the written addresses on the ‘no-case-submission’.

The senior counsel in Africa Law Practices (ALP) Uyiekpen and his younger brother, Erhunse, were first arraigned before Justice Nicholas Oweibo on August 14, 2019, during the court long vacation on three counts charge.

Upon resumption from the vacation, their case filed was reassigned to the court presided over by Justice Chuka Obiozor, were their plea was retaken on the same three counts charge.

In the charge, Uyiekpen, was alleged to have procure his brother, Erhunse, to make the cash payment of the said sum without recourse to financial institutions.