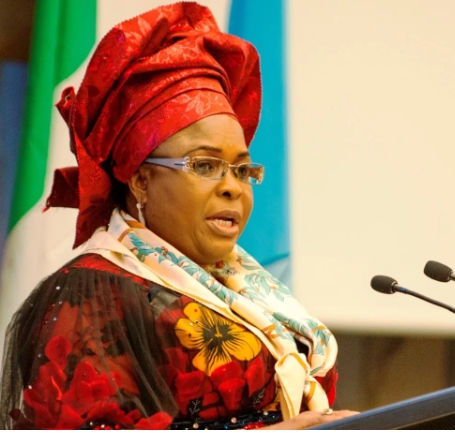 Justice Chuka Obiozor of a Lagos Federal High Court, today, fixed April 13, for the hearing of final Forfeiture of the sum of $5, 781, 173, .55 million USD and the N2.4 billion, said to have been illegally acquired by the former First Lady, Dame Patience Jonathan.

Justice Obiozor fixed the date, after counsel to the parties appeared before the court over the matter today.

The Economic and Financial Crimes Commission (EFCC) had sometimes in 2017, commenced the hearing of the suit against Mrs. Jonathan alongside LA Wari Furniture and Bathes before Justice Mojisola Olatoregun, who retried from the Bench in 2019.

The monies were said to be warehoused by Skye Bank Plc and Ecobank Plc respectively.

Justice Olatoregun had on April 26, 2017, ordered the temporary forfeiture of the monies, sequel to an ex-parte application by Economic Financial Crimes Commission (EFCC), the order which was affirmed by both Court of Appeal and Supreme Court.
However, midway to the conclusion of hearing on the final Forfeiture on the said money, Justice Olatoregun, who retired from the Bench, the development which compelled the Chief Registrar of the Court to reassigned the matter to Justice Obiozor for hearing.

At the resumed hearing of the matter today, EFCC’s counsel, Mr. Abass Muhammad, narrated to Justice Obiozor the journey of the matter.

In his words: “this matter is a suit instituted before your learned brother, Justice Olatoregun now retired, where we prayed for the final Forfeiture of the sum of $5. 781, 173. 55 million USD, warehoused in Skye Bank Plc and N2. 421, 953, 502. 78 billion, property of LA Wari Furniture and Bathes in Ecobank Plc.

“It  was instituted and same interim order was granted on April 24, ,2017, upon which it went up to Supreme Court and application for its final Forfeiture was moved  but the trial judge didn’t deliver judgment before retiring.

“It was upon that fact that the file was transferred to the registry where it was reassigned to this Court”.

Also, Ige Asemudara, who held the brief of Chief Mike Ozakhome (SAN) while aligning himself with the submission of the applicant’s counsel, however added that that matter ought to commence ‘denovo’, since it’s before a new court.

Asemudara however stated that he is bound by the court’s decision.

In his wisdom, Justice Obiozor, said he cannot upturned the exparte order made by Justice Olatoregun, but to proceed with the hearing of the application for final Forfeiture.

With the consent of parties and court’s convenience, the matter was adjourned till April 13, for the commencement of the hearing of all applications on the matter.