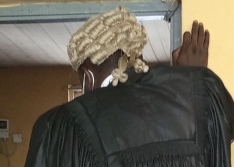 Barrister Ismaila was arraigned before the court presided over by Justice Sule Muslim Hassan on a five count-charge of the offences, by the men of Police Special Fraud Unit (PSFU) Ikoyi-Lagos.

The lawyer, according to the prosecutor, Barrister Henry Obiaze, committed the alleged offences sometimes in May, 2019, at Ikoyi, Lagos.

The prosecutor told the court that the lawyer, fraudulently obtained the said sum from a contracting firm, Edward and Jones Contracting Services Limited, under false pretence of rendering a service to the company

The prosecutor also told the court that the defendant, in a bid to cover-up the alleged fraud, issued several Zenith bank Plc cheques, which were rejected and returned for lack of funds.

The defendant denied the allegation and pleaded not guilty to all the counts charge.

Upon the defendant’s not guilty plea, the prosecutor, Mr. Obiaze, asked for a trial date, while also urged the court to remand the defendant pending the determination of the allegations against him.

But counsel to the defendant, Mr. Yakubu Galadima, who did not opposed to the trial date request of the prosecutor, however told the court of his client’s pending bail application, which he said had been served on the prosecution.

Following Galadima’s submission, which was confirmed by the prosecutor, Justice Hassan allowed the moving of the application.

Ruling on the application, Justice Hassan admitted bail to the defendant in the sum of N5 million with one surety in like sum.
Justice Hassan also ordered that the surety, must with be a Civil Servant not less than Grade Level 14, or a landed property owner within the court’s jurisdiction.

The judge however released the defendant to his counsel, Mr. Galadima, pending the perfection of the bail terms, while adjourned the matter till May 13, for trial.

Count one of the charges against the lawyer reads: “that you Barrister Ismaila Ahmed Olokun ‘m’ sometimes in May 2019 at Ikoyi in the Lagos Judicial Division of this Honourable Court did by false pretence and with intent to defraud obtain the sum of Two Hundred and Fifty Thousand Unitea States Dollars ($250,000) equivalent of Eighty Eight Million, Nine Hundred and Twelve Thousand, Nine Hundred and Thirty Two Naira only (N88,912,932) from Edward and Jones Contracting Services Ltd and thereby committed an offence contrary to Section 1(1} (a) (b) and punishable under Section 1(3) of the Advance Fee Fraud and other Fraud Related Offences Act, 2006.

The fifth count reads: “that you Barrister Ismaila Ahmed Olokun “m’ on the 15th day of July, 2019 at Victoria Island Lagos in the Lagos Judicial Division of this Honourable Court did issue Zenith Bank Cheque No. 05390980 dated 15th June 2019 for the sum of Four Million, Four Hundred and Seventy Five Thousand Naira (N4,475,000.00) to Edward and Jones Contracting Services Ltd which was presented for payment within three months and it was dishonoured on the ground of insufficient funds standing to the credit in the Bank on which the cheque was drawn and thereby committed an offence punishable under Section 1(a) (b) (1) of the Dishonoured (Cheques) offences Act, Cap. D11 LFN 2004”.