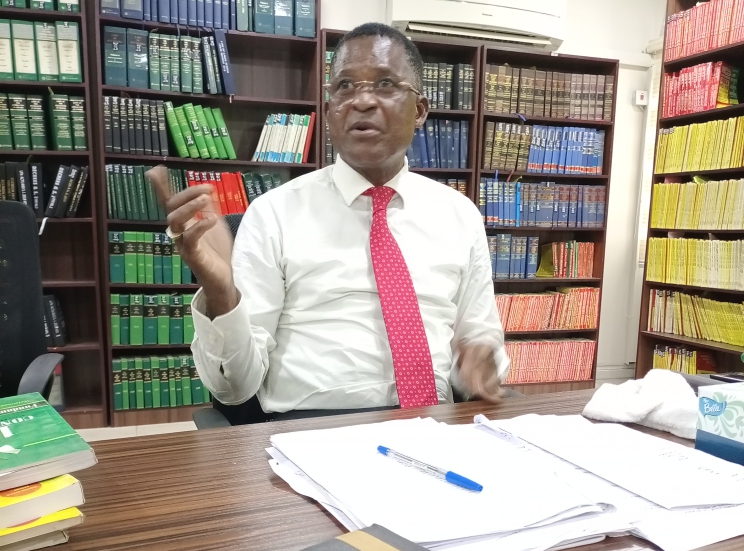 Mr. Emeka Ozoani (SAN) Explaining The Implications Of Not Obey Courts Orders On Judiciary’s Financial Autonomy By The State Governors

A Senior Advocate of Nigeria, Mr. Emeka Ozoani has called on the President Mohammadu Buhari led-administration to compel the State Governments to implement autonomy of the judiciary as  ordered by the court.

Speaking with newsmen in Lagos, Ozoani (SAN) said nothing stops the Federal Government from compelling the State governors from implementing the court order since 2014, as he expressed his support for the Judiciary staff to press on their demands for Judiciary autonomy.

“Since 2014 when Justice Ademola (now JCA) delivered the judgment. The judgment of the Court must be obey until it’s set aside, not only because you have appealed, it must either be varied, set-aside or stayed, without these, it must be obeyed. Till now, there is none”.

He said there is no more law that is required to for implementation, noting that there are cases decided by the court which upheld the autonomy of the Judiciary in tandem with the Constitution and there was no appeal pending. He added that it is correct to pursue a policy of financial independence of the court as guaranteed by the constitution and affirmed by the three decisions to of superior court.

The senior lawyer said that obidience of the judgement of court is at instance of the executives.

“Tell me why they (JUSUN) should not strike. In my thesis, I said “Accountant General of the Federation and State House of Assemblies: the cause of the the strike”. Even, if the President Buhari is trying to do Executive Order, Section 1(9) of the Order, without prejudice to applicable laws, legislations and conventions, the State tier of government which also provides for financial Autonomy of the State legislatures and Judiciary for allocation and appropriation of funds for the States’ legislatures and Judiciary in the State.  Under Section 7, which create financial Autonomy for the local governments, but have you see one in Nigeria”, he asked.
Ozoani (SAN) who also expressed worries on the next elections in the country, said except there is financial autonomy of the judiciary is not granted. “The governors can hold the judges to ransom. If we don’t have judicial financial autonomy, the next election will be crazy, Judgments will be flying here and there. But when the Judiciary self-financing, it can tell you the appointment will always be a king to what obtained in Western world. And the western world have admit that Nigeria have good judges, but I can tell you, how can we have good judges when their hungry, the governor did not release their money and allowances for the month, to the CJs, the CJs have to call Judicial Service Commission (JSC) before the judges are paid”.

Th Silk also expressed on the strike worries which he said it success depends on the Union’s leadership. “It is the leadership of these unions that determine the outcome of every strike. Have you forget NLC, Fuel Strike and the rest. Its the results of the Union leaders. Infact, I can tell you virtually that every legal practitioner support it. I can tell you, if we all determined, the government will back down, it’s the law, it’s constitutional provision, we are not begging the government to respect the laws. The National Assembly has make the law nothing more”.