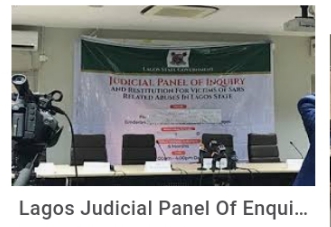 The Lagos State Judicial Panel on Restitution For Victims of SARs Related Abuses and Other Matters namecoded EndSARS Panel, has ordered the Lagos State Surveyor General to survey the remaining part of 26 acres of farmland in Agemo Badagry area of the State, which was allegedly Encroached by the men of Nigeria Police.

The panel led by Justice Doris Okuwobi made the order after the disputed parties appeared before the panel and expressed their intentions to settle the matter amicably on Tuesday.

A 76 years old complianant, Prince Adenwale Adewuyi, told the panel through his lawyer Debo Adeleke how Police encroaches on his farmlands and demolished the structure without any court order to justify their actions.

The Chairman of the panel, Retired Justice Doris Okuwobi ordered surveyor general to measure the land to ascertain size of the encroachment and the remain part following submission of police and the petitioner before the panel on their readiness to settle as all parties involved visited the place as ordered by the panel.

The panel also odered the petitioner counsel to file the notice of withdrawal of the suit which had earlier adjourned sine dine for amicable resolution before a High Court Justice O. Emeya.

The panel said that is unconstitutional to retain action pending at the court at the same time.

At the resumed hearing on Tuesday, the Petitioner’s counsel, Debo Adeleke expressed gratitude to the panel for the effectiveness of discharging justice to victims of injustices, noted that all parties had visited the land (locus) in accordance with the panel directives. Adding that they were able to looked at the size encroachment.

His submission while corroborating Adeleke’s submission, Police lawyer, Mr. Emmanuel Jackson,a Chief Superintendent of Police (CSP), who led the representatives of the police, said the portion mistakenly developed by the developer is six block of semi detachable bugalow built in a mini part.

CSP Jackson prayed the panel to order professional to do the measurement of the said land.

He further told the panel that the Police said they have no grudge with the man, adding that the police only encroached on little part, while the larger part of land is still there and promised that the police has comply to return the land.

But Mr Adeleke in his response, assured the panel to file withdrawal notice of the case at high court, noting that it was due to an ongoing JUSUN stike but before the next adjourn date. It will be filed.

Following the submissions of the parties, the panel therefore adjourned further hearing to May 24, for the report of settlement