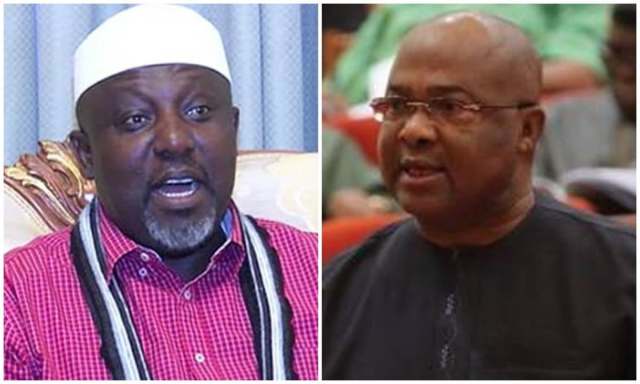 There is a sterling and unbelievable revelation on how  Zenith Bank Plc in connivance with two separate governors from the same State to siphon the resources of their State.

The revelation came at the in instance of an audit body set up by Imo State government, which exposed how Zenith Bank, with charges unknown to financial regulations, creamed off N111.5 billion from the State.

Consequently, the audit group made up of 10 forensic audit consultants, have petitioned the Speaker, Imo State House of Assembly, seeking the Imo legislative body to intervene with a view not only to recover the humongous amount from the bank, but also to remove the State commissioner for Finance, Dr Doris Nkiruka Uzoka-Anite, a former senior staff of Zenith Bank, who they claimed is planted in government to continue to superintend over the siphoning of government money into individual pockets of the governor, Sen Hope Uzodinma, and other vested interests.

According to the petition, the sleaze did not start from Hope Uzodinma, the incumbent governor. It started when Rochas Okorocha assumed office as governor. While in office, Okorocha gave over 90 per cent control of Imo State banking transactions to Zenith bank while other banks struggled for the remaining 10 per cent. Okorocha was alleged to have appointed a senior staff of Zenith bank, Chike Okafor to handle his government’s finance portfolio as Commissioner for Finance.

However, things got to the head when Emeka Ihedioha assumed office as governor on May 29, 2019. It would seem that Ihedioha got wind of the unholy alliance between Okorocha and Zenith bank, and in less than a week in office. Specifically, on June 6, 2019, he constituted the Financial Advisory Committee comprising 10 forensic accountants, all indigenes of Imo to look into the books of the state government with all her bankers.

The Committee was chaired by Dr. Abraham Nwankwo, foremost Economist, World Bank Consultant and former Director General of the Debt Management Office (DMO), and Nick Opara-Ndudu, a former Bank Deputy Managing Director, who also served as a commissioner under the Okorocha administration as secretary.

After four months of work, the committee presented its report to Ihedioha on December 1, 2019, who directed the State’s Accountant-General to start the process of recovery of the funds from Zenith Bank. On December 3, 2019, the Accountant-General issued a 30 day ultimatum to Zenith bank and other banks involved to refund the funds illegally taken from the purse of the state. Sadly, the move had to be aborted as Ihedioha was removed as governor via a Supreme Court judgment on January 14, 2020.

Request To Save Imo State From Continued Assault By Vested –The Appointment Of One Dr. Doris Nkiruka Uzoma-Anite of Zenith Bank Plc As Imo State Commissioner of Finance Vis-A-Vis Non Recovery of N111.5 BILLION Of State Fund from Zenith Bank Plc: A Case In Point
“Preamble
Being citizens of Imo State, committed to contributing to its progress, and having been mandated under His Excellency, Right Honourable Governor Emeka Ihedioha’s administration as the Financial Advisory Committee (FAC) to solve a major problem, and having meticulously carried out the assignment for the good of the present and future generations of Imo State, we are committed to ensuring that the people of Imo are not denied the benefits of our contribution, under whatever guise.

“Accordingly, we write to petition against the appointment of Dr. Doris Nkiruka Uzoka Anite as Finance Commissioner with the added mandate of coordinating the economy of Imo State, and the failure of the administration of His Excellency, Distinguished Senator Hope Uzodinma to recover amounts which have been established that Imo State was defrauded by Zenith Bank PLC.

“Dr. Doris Nkiruka Uzoka-Anite is a former staff of Zenith Bank PLC which is the major bank involved in severe financial infractions tantamount to defrauding the State of over N111.5 billion.
“BACKGROUND
On June 6, 2019, the former Governor of Imo State, His Excellency, Rt. Hon. Emeka Ihedioha, CON, KSC, set up a Financial Advisory Committee (FAC) with Dr. Abraham  Nwankwo as Chairman and Mr Nick Opara-Ndudu as Secretary, to resolve the issue of financial infraction that occurred in the State. It had as part of its terms of reference the following:

“To review all Financial transactions and where necessary a forensic audit with a view to ascertaining sources of funds and the application of same.

“To review such disbursements/ applications of state resources, to ascertain the propriety of levies charges on accounts, interest payment of loans and deposits, year applicable authorization etc.

“To ascertain and document the locations of and balances on all bank accounts operated by the Imo State Government, its Ministries, Departments and Agencies as at May 29, 2019.

“In the course of this assignment, given the scope of the work, and the need for professionalism, the State Government upon the recommendation of the Committee engaged the services of ten (10) consulting firms. After four months of work, and extensive review of the bank accounts, a report was presented to the government of His Excellency, Rt. Hon. Emeka Ihedioha on December 1, 2019.

“Following the change in the government occasioned by the Supreme Court judgment of January 14, 2020, government being a continuum, the current Governor His Excellency, Distinguished Senator Hope Uzodinma was appraised with the work of the Committee via letter dated February 6, 2020. The letter (hereby attached as Appendix 1) referred His Excellency to the joint report of the consortium of accounting and auditing consultants, which concluded that the nine banks whose accounts were reviewed were to refund the sum of N74,602,631,560.46 Billion only, to the State as physical amount involved in infractions and attendant penalties. In addition, the sum of N38, 221,701,806.96 billion only, was to be claimed covering the principal sum and attendant penalties arising from the aggregation of debit entries to the State account without proper narrations and for which no explanation was provided to the Financial Advisory Committee in spite of repeated demands.

“We had made it clear in our referenced letter (Appendix 1) to His Excellency, Distinguished Senator Hope Uzodinma that it was necessary that the Government recovers the money from Zenith Bank PLC as the State direly needed money to fund provision of services and infrastructure to Imo people. We also pointed out that it would be a historic disservice and insult on Imo people if Zenith Bank Plc was not made to return all the loot – under any guise”.

“Surprisingly and strangely, out of that amount N3 Billion only was reportedly paid to Imo State as full and final payment. We, therefore, write on behalf of the citizens of Imo State, demanding that the House of Assembly, as part of its constitutional role to investigate and establish the following: Why only N3 billion was paid by Zenith Bank Plc out of the sum of N27.093 billion which was already irrefutably established as minimum recoverable from the bank (letter and schedule of computation from Consultants forwarded to the Governor is hereby attached as Appendix 2).

“Why the same bank which had been found to deliberately defraud the State by booking and recovering a loan that was unrequested and undisbursed, even charging interest on the fictitious loan, amongst other infractions, has not been reported to CBN and EFCC but instead is being retained as banker to the State.

“Why, with all these allegations against Zenith Bank Plc and with no clarity as to the outcome of the review process, a staff of the same bank in the person of Dr. Doris Uzoka-Anite, would be seconded as Commissioner for Finance with the additional mandate of coordinating the economy of the State.

“While it is the prerogative of the Governor to make appointments, we believe they should not be inimical, antithetical or overwhelmingly against the progress of the State. This appointment clearly appears so and seems like a reward to Zenith Bank PLC for its fraud against Imo State.

“Indeed, it creates the grave impression that Imo State is being treated as a vassal territory of Zenith Bank Plc, a huge insult on each and every citizen of Imo State, which can only be  assuaged by ending this type of malevolent marriage with Zenith Bank Plc refusing to have its officers seconded to oversee Imo State’s Treasury, thereby refusing to sustain the plundering of the State’s Treasury.

“It is worthy to note that all the infractions contained in the report were committed against Imo State Government under the stewardship of a former staff of Zenith Bank Plc, who was equally appointed Commissioner for Finance in the Governor Rochas Okorocha administration.

“The Committee noted that most of the bank charges against the State were far in excess of that allowed by the extant banking regulations and guidelines underscoring the incestuous relationship between the then Honourable Commissioner of Finance and his former employer.

“The full report of the Financial Advisory Committee and joint report of the Consortium of Consultants, which were submitted to Governor Uzodinma’s administration can be referenced to confirm these facts.

“We believe that a great injustice has been done to the State and needs to be given due attention and remedied through among other legitimate measures, restitution.

“Imo people are no fools and their sensitivity is being pricked beyond limit; their sensibility is being abused beyond limit; their tolerance is being stretched beyond limit. History beckons the Honourable Speaker and the entire House of Assembly to pursue and recover these sums in the best interest of the State and for the sake of posterity, so that the present and future generations of Imo State are not condemned to carry a mark of stupidity, subservience, derision and indignity because of the nonchalant attitude of their elders.

“We thank you and look forward to this matter being given the attention it deserves. Please accept, Honourable Speaker, the assurances of our esteemed regards.

Yours Faithfully,
For: The Financial Advisory Committee”.