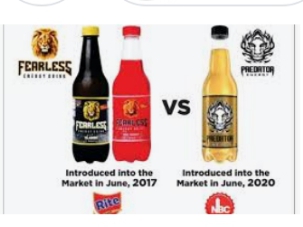 In the suit, marked FHC/L/CS/92/2021, both firms are locked in battle over alleged similarities or not between the logos of their energy drinks.

Rite Foods had instituted a legal action against the NBC on February 9, 2021 asking for an order of the court to restrain NBC from further promoting its Predator Energy drink in the Nigerian market.

It claimed through its counsel Mr. Muyiwa Ogungbenro, that Predator’s lion insignia bears a striking resemblance to the Fearless.

But NBC denied any claim of trademark violation or passing off with its Predator Energy drink vowing to contest the case vigorously in court.

It has also prayed the court to set aside an ex-parte injunction obtained by Rite Foods Ltd against the continued promotion the Predator Energy drink in the Nigerian market.

NBC’s counsel Mr Mark Mordi had told Justice Aneke that Rite Foods’ applications were brought malafide and were without merit as the suit lacked a firm ground to stand in law.

He contended that the Predator logo had been in existence and in use in many markets outside of Nigeria even prior to the launch of Fearless by Rite Foods in the Nigerian market.

When the matter came up before Justice Allagoa, he fixed the September 22 date for hearing of preliminary applications in the suit.