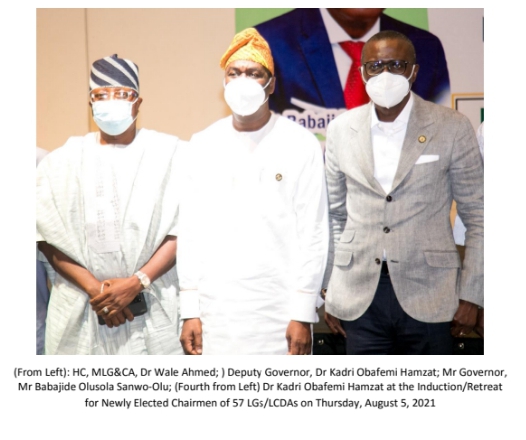 Lagos State Governor, Babajide Sanwo-Olu has charged Local Government (LG) and Local council development area (LCDAs) to create an economic agenda and come up with innovative programmes that would help to alleviate poverty amongst people at the grassroots.

A release issued by Mrs. Folashade Kadiri, Director, Public AffairsMinistry of Local Government and Community Affairs, stated that Governor Sanwo-Olu made the call at a two-day induction, retreat for the newly-elected chairmen of the 57 LGs/ LCDAs with the theme: “Engendering Peace, Security and Development at the Grassroots,” in Lagos on Thursday, Sanwo-Olu admonished the council bosses, “To think out of the box and create enabling environment for wealth creation among people at the grassroots”.

At the event, organised by the Ministry of Local Government and Community Affairs, the Governor called for peace between the Council Chiefs and the electorates, saying that it is only under a peaceful atmosphere that jobs can be created.

He emphasized that it is their responsibility to serve the people, adding that, “You have to write your names in gold as you work with your people.

Earlier, the Commissioner, Ministry of Local Government and Community Affairs, Dr. Wale Ahmed congratulated the elected chairmen and lauded Governor Sanwo-Olu who deemed it fit to organise retreat such as this especially at the level of Council Chairmen, to discuss issues that are pertinent and complex to the various LGs and LCDAs that require in-depth and innovative reflection.

“This will allow the chairmen add their collective contributions towards the actualisation of the THEMES Agenda, particularly at the grassroots.” He said.Ahmed stated that the theme of the event was carefully chosen to address some very important discourse, which include “Administrative Guidelines for Local Governments”; “Due Diligence on Project Procedure and Implementation in LGs/LCDAs on Chieftaincy Matters”, “Drainage, Waste Management and Sanitation as it relates to LGs and LCDAs” and with “Effective Communication and Strategic Public Relations Skills”.

He said, ‘’Having just emerged as the choices of the electorates, this retreat underscores the need to ensure that Chairmen of the 57 LGs and LCDAs of our great State grasp policies that would help stimulate socio-economic development at the grassroots and also engender the dream of Making Lagos a 21st Century Economy.

‘’While I totally agree that returning Chairmen might be in tune with requisite skills for Council administration, some of the new Honourable Chairmen would certainly appreciate this window of opportunity, to learn a thing or two about result-oriented Council administration, synonymous with Lagos State which has made us the envy and admiration of other States in the Federation.

‘’There is no doubt, Mr. Governor, that with this Retreat and the implementation of the policies and ideas that will be discussed here, Lagos State will continue on the pathway of a progressive, notable and even development that will affect every fibre of the state”.

Speaking on behalf of his colleagues in the 57 council area, Chairman, Bariga LCDA, Hon. Alabi Kolade David, promised that they will all perform creditably well and work to make the All Progressives Congress (APC) proud.

Harping on how they intend to achieve success in their tenure, he said: ” It’s all about collaboration and synergy between local government and all agencies of government.”And of course, we will take a lot away from this and we are going to administer it at the grassroots”.