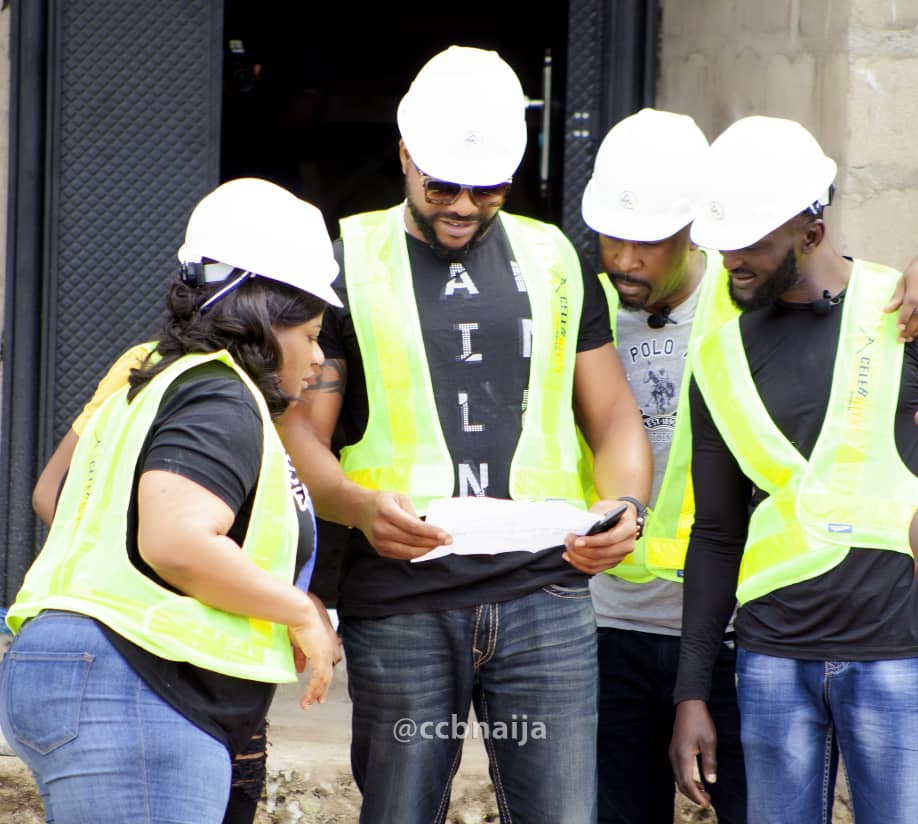 Celebrities Strategizing On The Day’s Task

CCBNAIJA: Brilliance, Smartness At Play As Anto Lecky Props Teddy A To Win the Task •Ninalowo Migrates To Winning Side

Each day celebrities in the CCBNaija Reality TV Show are compelled to think outside the box in getting the job done, with yesterday was not different, as Teddy A with support from Anto Lecky won the day’s game.

Before the day’s task, celebrities were to crack their brain in solving a riddle. The clue to the riddle was hidden in different locations of the House by both team leaders. After a thorough search, both teams got the riddles, but how to find the tool hidden in the sand became a tug of war. Teams A and B were standing beside the sand where the hammer was hidden, but could not figure it out until Teddy A smartly took a shovel and started digging the pile of sand in search of the hidden hammer.

Teddy A Showing Victory Sign After Finding The Hidden Hammer

Reacting to his success, Teddy A said: “I feel good. I searched for it; found a clue, big up to my team. We had issues trying to find the riddle itself; after we did, we knew what it was and when we came out it was easy for Anto and I to unravel it, and the rest, they say, is history”.

Having been said to be the smartest and most intelligent by some of the celebrities, Anto feels it’s amazing. “I love games like this, puzzles and things like that. It’s funny because the first place I would have hidden the clue was in the toilet. But I wasn’t sure Nkechi would do it so I started with the living room. It was great and amazing though. It’s God that provides us with brilliance and gumption to try, so I am grateful. I hope that viewers are voting based on brains not only on entertainment and fame. Of course, it’s a show where you vote for your favourite. Give me a chance by voting for me because I am trying my best”, she said.

Celebrities Searching For The Hidden Hammer

Ninalowo Bolande switched to Team B after losing today’s game; saying he never chills with losers, but migrates. “I am not even loyal to myself. Today isn’t loyal to tomorrow, they leave each other. Today and tomorrow are close but aren’t loyal. I can switch like the weather, if I receive an alert of N100 million now, I will walk away from here straight; everything changes in seconds. The earlier you know that the better you start living. I live for the moment”, he said.

As usual, the day’s task kicked off with building drama and the celebrities were busy supervising their jobs and putting finishing touches to make sure the tiles were well laid, the ceiling intact and punctuality improved. Adeyela Adebola (Lizzy Jay) and Josh Alfred (Josh2funny) added fun to the work during break period while Nkechi Blessing was spotted relaxing after a hectic day on site, perhaps, sad as her team lost the day’s game.

Esteemed fans, keep voting for your favorite celebrities as you might be the lucky one with the highest vote that will win the 3-Bedroom Bungalow at stake. Always remember, the more votes you cast for your favourite celebrities, the better your chance of winning the prize.

To vote for your favourite celebrity in Nigeria, visit: www.ccbnaija.com/voteClick on the vote icon beneath your preferred celebrity’s name, fill the form, submit, choose your preferred payment method, and complete the steps.

For voters outside Nigeria, visitwww.ccbnaija.com/vote and CLICK on the international vote button at the top of the page: click on the vote icon beneath your preferred celebrity’s name; fill the form, submit, choose your preferred payment method and complete the steps.