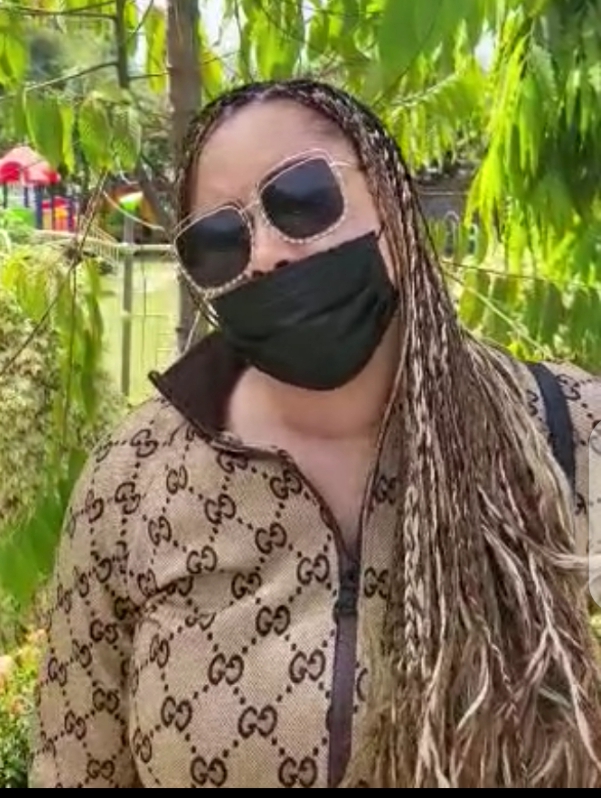 The Ex-Beauty Queen, While Waiting For Her Kids At The Park On December 18,

A former beauty queen and estrange wife of Mr. Femi Fani-kayode, the former Nigeria’s Minister, Precious Chikwendu  has alleged that the former Minister, has shunned a court order directing him to grant her access to their four children during the festive period.

Chikwendu and Fani-Kayode, who cohabited for six years, are locked in a legal battle for custody of the four children of their cohabitation. One of such suits is before the Customary Court of the Federal Capital Territory (FCT).

Chikwendu, the petitioner, said the court on December 8, 2021 directed her and Fani-Kayode, to work out an arrangement to allow her access to her kids during the Yuletide.

The Ex-Beauty Queen, While Waiting For Her Kids At The Park On December 25

Following which her lawyer, Abiodun Olusanya of Emeka Uchegbulam & Co. wrote to the respondent throughhis lawyer Adeola Adedipe requesting access to the four kids on Saturday, December 18th; Saturday, December 25 and Saturday January 8 at Central Park, Abuja from 9am till 6pm.

According to her, she went to the Central Park, on December 18 and December 25 from 9am till 6pm but her kids were not brought to her.

The letter dated December 13, 2021 by her lawyer reads in part: “Request For Access To The Petitioner’s Four Male Children”. The above subject matters refer. We remain Counsel and Solicitors to Precious Chiwendu (the Petitioner in the above mentioned suit) hereinafter referred to as our client on whose concern and instruction we write you.

“Be reminded that on the 8th day of December, 2021, wherein the above suit came up for hearing, Their Honours at the hearing of both Counsel in open court ordered that the petitioner be granted access to her children during the festive period and that Counsel should agree on the days, times and where the children would be brought for the petitioner to spend time with her children.

“Sequel to the said Order, we have discussed with the Petitioner, though she would have loved to see her children every day, but in fairness we hereby request the children be made available on the following three days, location and time; 1. This Saturday, 18th day of December, 2021 at Central Park, Abuja from 9am till 6pm, and

“Kindly note, that should your client reserve any objection to this date, we suggest that the Petitioner be allowed access her children on Saturday, 25th day of December, 2021; Christmas Day as an alternative to the 1st day of January date, and.

“3. Saturday, 9th January, 2022 same venue and time. Our choice for the suggested location is borne out of our client’s decision not to visit her children at your client’s residence, due to her traumatic experiences she had at the same venue.

“We believe in total regards to the Order of the Court and paramount interest of the children, that our request would be positive considered and agreed to”.