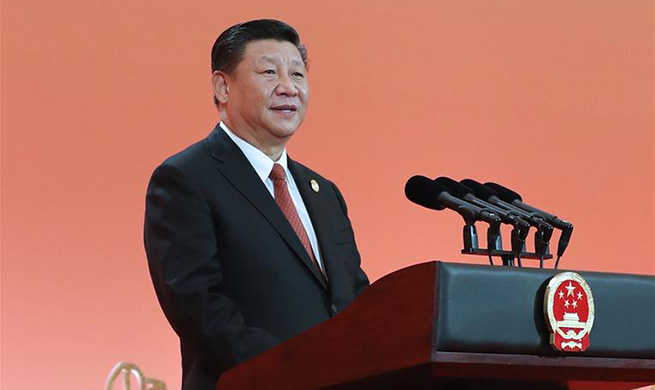 Chinese President, Xi Jinping gave a televised New Year’s address hailing his country’s achievements over the past year, despite roiling protests in Hong Kong, condemnation of China’s detention of Uighur Muslims and a trade war.

The speech, broadcast live on state-run television, rounded out a year in which China has both faced the world with more confidence and boldness than ever before and received unprecedented pushback from abroad as a result.

A trade war between Washington and Beijing dragged on into its second year, bringing tensions between the two superpowers and the world’s biggest economies to a new high, dampening celebrations for the 70th anniversary of the founding of the People’s Republic of China in October.

Confrontations abroad were also compounded by crises at home.

Under the trade war’s shadow, China’s economic growth rate slowed to 6 per cent, a 27-year low.

In the country’s far west, Beijing’s quest to quash opposition in Muslim-majority Xinjiang saw as many as 2 million Uighurs and other ethnic minorities corralled into “re-education’’ camps widely condemned as ethnic cleansing.

In Hong Kong, a proposed extradition bill allowing for criminal suspects to face trial in China’s Communist Party-run courts brought millions to the streets in protests that have lasted over six months.

In that time, they have morphed from single-issue origins into a wide-ranging pro-democracy movement, creating an unprecedented challenge to Xi’s regime.

The government’s attempts to rein in these challenges fed worldwide pushback against Xi, inspiring new legislation punishing Chinese authorities that sailed through the U.S. congress on a wave of bipartisan support.

In his 12-minutes long speech, the longest since he assumed the presidency in 2013, Xi said that the One Country, Two Systems framework governing Hong Kong was working well and had the support of the people.

Adding that the prosperity and stability of Hong Kong is the wish of all Hong Kong compatriots, and the expectation of all the people of the motherland.
Source-: NAN