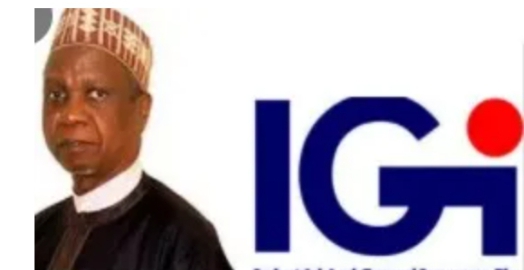 Justice Akintayo Aluko of a Lagos Federal High court, has fixed June 8, 2022, for the hearing of petition over alleged mismanagement of the assets of IGI Insurance Plc by it’s Board of Directors.

Justice Aluko fixed the date, after Counsel to the petitioners, Olayinka Aileru, told the court that his clients’ petition has been filed and served all the respondents in the suit.

Aileru told the court that all the respondents, rather than filing their responses to his clients’ petition only filed a preliminary objection, which he said was not competent.

He further told the court that the grouse of his clients’ petition was premised on failure of the management of the insurance firm to hold Annual General Meeting (AGM). And that there are allegations that the company’s assets are been dissipated.

The petitioners’ counsel also told the court that all the respondents despite being aware of today’s proceedings failed to appear before the court.

He however asked the court for another date for hearing of the petitioners’ petition.

Justice Aluko, while ordered that hearing notice be issued and served on all the respondents, adjourned till June 8, for hearing of the petition.

The petitioners are accusing  Ahmed and six others are perpetuating illegality in the management of the affairs of the Industrial and General Insurance (IGI) Plc.

The petitioners had earlier asked the board to call an Extra-Ordinary General Meeting (EOGM) to intimate the shareholders of issues in the company. Owing to the failure of the board to act, they claimed to have wrote to the regulator, the National Insurance Commission (NAICOM) and the Securities and Exchange Commission (SEC) seeking the intervention of the two regulators in the affairs of IGI Insurance.

The petitioners accused all the respondents of failure or negligent to abide by the law to hold the company statutory annual general meeting for over five years, but embarking on “unrestrained asset stripping” by selling and transferring the company fixed assets without the approval of the shareholders authorizing same.

The respondents were also jointly accused of running the affairs of IGI Plc illegally in contravention of the provisions of the Companies and Allied Matters Act, (CAMA) 2020.

The petitioners are asking the court for a declaration that the affairs of the first Respondent (IGI Plc) have been and is being conducted in a manner that is unfairly prejudicial and oppressive to the interest of the petitioners.

The petitioners also prayed the court for “an order setting aside any or all acts of the second to eighth Respondents in purported exercise of the powers of such office and or respective offices without the approval and consent of the first respondent’s shareholders at the Annual General Meeting as recommended by statute and Memorandum and Articles of Association of the first Respondent.”

The petitioners further asked to order the Respondents to forthwith “cause the preparation and rendition of a true and accurate financial statement of the affairs of IGI Insurance Plc, for the years 2015, 2016, 2017, 2018, 2019 and 2020, such account to include, but not limited to accounts of all dealings in the fixed assets of the first Respondent and earnings, disbursements from and interests in the proceeds of such dealings.

The Petitioners further prayed the court to grant an order of injunction restraining the Respondents, their agents and privies from further acts of negotiations, sale or utilisation of the company’s assets, pending when the Respondents render proper accounts on the assets sales of the company at the properly convened AGM.

The petitioners in a 21-paragraph statement on oath deposed to by one Abiodun Anthony Akinjayeju, the deponent submitted that the actions of the Respondents ran foul of the extant provisions of the law.

He stated that the Respondents have “failed, refused and /or neglected to convene statutory Annual General Meeting (AGM) of the 1st Respondent, in flagrant disregard of S. 237 of CAMA” and that the last AGM of the company was held in 2016.

Akinjayeju stated that the respondents failed or refused to render annual audited account/reports of the company to company members as well as embarking “on an unrestrained asset-stripping exercise by their continued underhand sales and transfers of ownership of the 1st Respondents’ fixed assets, without prior approval of shareholders’ authorising same.”

He listed the company’s assets sold to include landed properties in Ikoyi, Victoria Island, Lagos, Bodija, Ibadan in Oyo State, Kacyru Kigali, in Rwanda without authorisation from shareholders.

He noted that several letters have been written to challenge the alleged illegalities of the Respondents, but nothing positive was done to the complaints.

He submitted that all these actions have affected the fortune of the company and it has led to the company’s expulsion from the Nigerian Insurers Association (NIA), which invariably has affected their Investments in the company.

The petitioners stated that the affairs of the company are being conducted in a manner oppressive to them and therefore urged the court to grant their prayers.