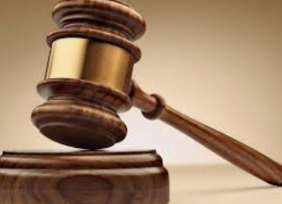 Court Frees Woman Accused Of Matricide After 4 Years Of Trial

Reprieve came the way of a housewife, Mary Aliu, who was accused of killing her husband, Kingsley Perewe, five  years ago, as a Tafawa Balewa Square (TBS) High Court of  Lagos State, today freed her of the murder allegation.

Justice Modupe Nicol-Clay who presided over the court discharged and acquitted Mary of a count charge of murder, made against her a in suit numbered LD/5944C/17, by the Lagos State government.

The discharged and acquitted woman, Mrs. Mary Alilu, has been standing trial and detained for over four years on the allegation.

She was arraigned for the alleged offence by the Lagos State Government on November 12, 2018.

The prosecutors, Adeshola Adekunle-Bello and Titi Olanrewaju-Daud, had told the court that the defendant was believed to have killed Perewe “by cutting him on his neck and head with a knife” on or about January 27, 2017, at about 11:40 pm at No. 111, Abukuru Street, Ajegunle, Lagos.

The offence was said to be in contravention Section 223 of the Criminal Laws of Lagos State, 2015.

Alilu pleaded not guilty and the trial commenced.

The prosecution called three witnesses including the Investigative Police Officer (IPO) before closing its case. It urged the court to convict and sentence Alilu accordingly.

Alilu opened her defence by giving evidence and also called two other witnesses.

Defence counsel O. J. Akinwale raised two issues for determination being whether the prosecution proved the case beyond reasonable doubt and whether exhibits tendered by the prosecution was admissible or ought to be expunged.

He prayed the court to discharge and acquit the defendant.

The judge resolved the issues in Akinwale’s favour.

In setting Alilu free, Justice Nicol-Clay agreed with both parties that the fact that the defendant died was not in contention.

However, she noted among others that the evidence of the prosecution witness (PW) 1 &2 were contradictory, thus, “fatal to the case of the prosecution,” as stated in the 2017 case of Hassan vs State.
The judge also noted the prosecution’s failure to link the alleged murder weapon with the defendant or the deceased.

Justice Nicol-Clay observed that although PW 3 (IPO) claimed that the defendant killed the deceased with a knife, the purported knife was not sent for forensic examination.

“He (PW3) could not tell whether the blood was that of the deceased,” the judge said, adding that there was no nexus between the knife and the defendant.

PW1&2 had testified that Alilu killed her husband, but dismissing their evidence, the court observed that the duo, not being medical practitioners, cannot prove cause of death.

Justice Nicol-Clay held: “There is no direct evidence (linking the defendant to the alleged crime), the evidence of the prosecution witnesses are not cogent and compelling enough; there is so much doubt in this case.”

As for the wounds on the deceased’s neck and head, she said: “There is no evidence that no other sharp object could have caused the injury on the deceased.

“The defendant is hereby discharged and acquitted.”