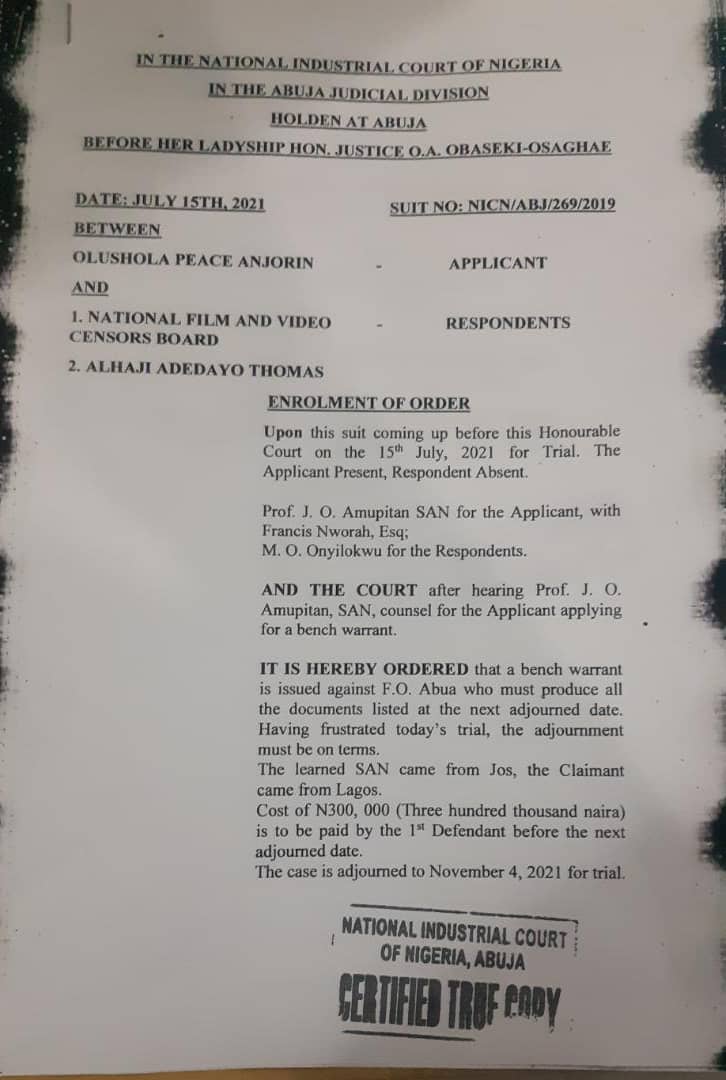 Copy Of The Enrolled Order Of Bench Warrant Against Abua

The National Industrial Court of Nigeria (NICN) Abuja, has issued a bench warrant against the Director of Operations, National Film and Video Censors Board, Mr. Ferdinand Ogbaji  Abua, for his failure to appear before the court, despite being subpoenaed.

Apart from the Bench warrant issued against Ogbaji, the court also ordered awarded the cost of N300, 000, 00 against the Board, for disregarding the court summon.

The court presided over by Justice Osatohanmwen Ayodele Obaseki-Osaghae, issued the arrest warrant against Abua for willfully stalled the trial slated for July 15, in a suit filed against the Board and it’s Executive Secretary, Alhaji Adebayo Thomas, by a former employee of the Board, Olushola Peace Anjorin.

Justice Obaseki-Osaghae issued the bench warrant against Abua and awarded the cost on the Board, while granting an application made by Prof. Joash Ojo Amupitan (SAN), counsel to the applicant, in the suit.
Olushola an employee of NFVCB had dragged the Board and Thomas before the court for wrongful termination of his appointment in 2018, for being a ‘whistleblower’.

Anjorin in the suit marked   NICN/ABJ/269/2019, asked the court to make an order for reinstatement with full salary and other entitlements paid.

The applicant had told the court that before his appointment was unlawfully terminated, Board had stopped his salary and other entitlements for over one year.

The court enrolled order reads: “Upon this suit coming up before this Honourable Court on the 15th July, 2021 for Trial, The applicant Present, respondent Absent.

“And the court after hearing Prof J. O. Amupitan (SAN), counsel for the Applicant applying, for a bench warrant.

“It is hereby ordered that a bench warrant is issued against F. O Abua who must produce all the documents listed at the next adjourned date having frustrated today’s trial, the adjournment must be on terms.

“The learned SAN came from Jos, the Claimant came from Lagos, Cost of N300, 000 (Three hundred thousand Naira) is to be pad by the 1st defendant before the next adjoumed date. The case is adjourned to November 4, 2021 for trial”.