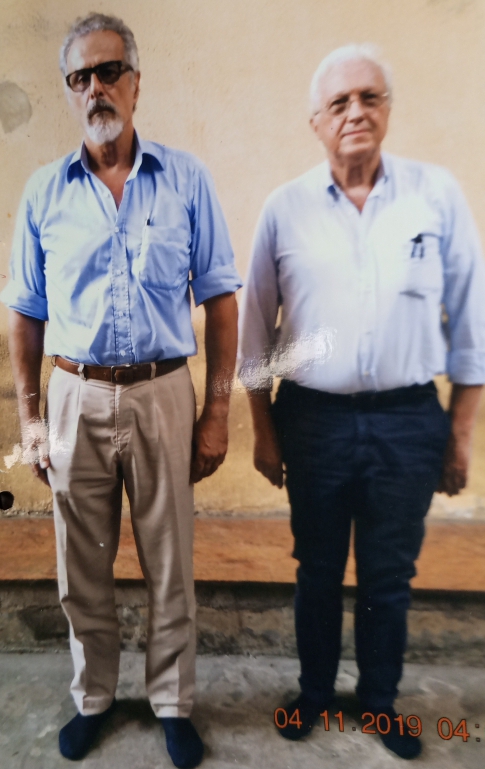 Two of The Defendants, Paolo Prono and Gianfranco Albertazzi

Justice Lewis Allagoa of a Federal High Court, Lagos, today, ordered the arrest of three Italians, for their countinuening disobedience to an order of the court to an order which compelled their appearance before him over the charges of forgery made against them by the office of the Attorney-General of the Federation (AGF).

Justice Allagoa had on last Friday, June 18, made an order ompelling the appearance of the three Italians to appear before his court today.

The three Italians, who are Alta ego of a Construction firm, Borini Prono & Company Nigeria Limited are: Paolo Prono, Gianfranco Albertazzi and one A. Prono.

Justice Allagoa made the order following the application for their arrest by the prosecutor, Mrs. Kehinde Bode-Ayeni.

At the resumed hearing of the forgery charges against the Italians today, the prosecutor, Mrs. Bode-Ayeni, while urging the court to issue an arrest warrant against them, said her application was pursuant to secton 349 of Administrative of Criminal Justice Act (ACJA) 2015.

She also told the court that since the charges was filed and served on the Italians, they have continuening refused and failed to appear before the court.

She said unless the court issued an arrest warrant, the defendants will continue to fail to appear before the court.

In opposing the application, counsel to the Italians’ construction firm, Mr. G. E. Ojokolo, told the court that he only represented their company and that the Defendants were not aware of the charges against them. He pleaded with the court not to issue arrest warrant against the Italians.

Ojokolo also told the court that the defendants have filed and served a preliminary objection to the charge against them.

He therefore urged the court to to grant the prosecutor’s request.

However, Justice Allagoa, in turning down Ojeikhudua request, said: “court orders are meant to obey. At the last sitting I ordered the defendants to be in court today.

“Before their application can be heard, they must appear before me.

“Consequently, arrest warrant is hereby issued against all the defendants”.

The judge has adjourned till September 24, 2021, for the execution of the arrest warrant.

The Italians, were formerly charged before the court presided over by Justice Muhammed Liman, by the AGF on February 18, 2021, alongside their company, Borini Prono & Company Nigeria Limited, on charges bordering on forgery.

AGF had in a charged marked FHC/L/338c/2020, accused them of forging the signature of one  Christopher Uzodike, as well as forging several invoices belonging to his company,  Land Technology Limited.

The defendants were alleged to have committed the offense between 2008 and 2009, in Lagos State.

The Offences, according to the AGF’s counsel, Mrs. Kehinde Bode-Ayeni, contravened sections 3(6) and 1(2)(c) and punishable under section 1(10) of the Miscellaneous Offences Act, Cap. M17, Laws of the Federation of Nigeria, 2004.

Count one of the charges against the defendants read: “that you, Borini Prono & Company Nigeria Limited, Paolo Brono ‘M’, Gianfranco Albertazzi ‘M’ and one other (A. Prono), now at large, between 2008 and 2009, in Lagos State, within the jurisdiction of the Federal High Court, Lagos, did conspire among yourselyes to commit a felony, to wit: forgery of signatures of Christopher Uzodike and Invoices of LandTechnologiesLimited and thereby committed an offence contrary to section 3(6),1(2)(c),  and punishable under section 1(10) of the Miscellaneous Offences Act, Cap. M17, Laws of the Federation of Nigeria, 2004.

Last count reads: “that you, BoriniProno &Company Nigeria Limited, Paolo Prono ‘m’, Gianfranco Albertazzi ‘M’ and one other (A. Prono), now at large, between 2008 and 2009, in Lagos State, within the jurisdiction of the Federal High Court, Lagos, did knowingly forge Land Technologies Limited Invoice No. 0034, dated 20/6/009 and the signature of Mr Christopher Uzodike, knowing same to be false, and with intent that it may be acted upon as genuine to the prejudice of Mr Christopher Uzodike and thereby committed an offence contrary to and punishable under section 1(2)(c) of the Miscellancous Offences Act, Cap. M17, Laws of the Federation of Nigeria, 2004”.