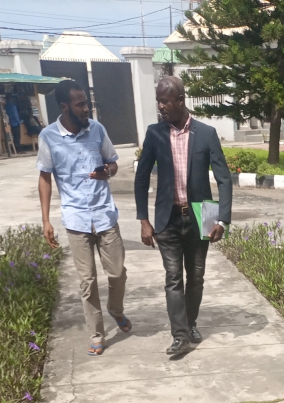 Justice Daniel Osiagor of a Lagos Federal High Court, today, ordered the remand Nura Abdullahi, a Bureau De Change (BDC) operator, in the custody of the Nigerian Correctional Services (NCoS) till November 10, when trial will commenced on the charges of conspiracy, fraud and stealing of N104, 325, 680 million.

Justice Osiagor made the remand order against the BDC operator, after admitted him to bail on the charges made against him by the men of Force Criminal Investigation Department (ForceCID) Annex, Alagbon-Ikoyi Lagos.

The BDC operator, according to the prosecutor, Mr. Anthony Ideye, a Superintendent of Police (Supol) had sometimes in May this year, obtained a Euro currency equivalent of N156, 325, 680 million, from one Bashiru Yusuf, under false pretence of converting same to Nigerian currency.

The prosecutor told the court that after obtaining the money, the defendant was only able to reimburse N52 million to the complaints and refused to pay the balance of N104, 325, 680 million.

Upon his plea of not guilty, the prosecutor asked the court for a trial date, as well urged the court to remand him till the determination of the allegations against him.

But his lawyer, Charles Idehen, pleaded with the court to admit his client bail in the most liberal terms, haven been in police custody for over a month.

Responding,the prosecutor told the court that the defendant was granted administrative bail but unable to meet up.

Justice Osiagor, in his Bench ruling, admitted bail to the defendant in the sum of N20 million with a surety in like sum.

The judge ordered that the surety must be a Grade Level 14 and above in the government employment, who resides in Lagos and having a landed property with title documents in Lagos.

The judge while adjourning the matter till November 10 for trial, ordered that the defendant be remanded in the NCoS’ custody till the perfection of the bail terms.