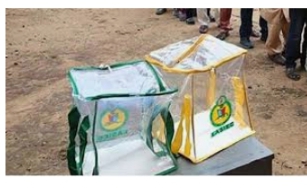 Justice Akintayo Aluko, who presided over the court in a judgment to the suit filed by the Plaintiffs and the Lagos State Independent Electoral Commission  (LASIEC) and the State’s House of Assembly, while citing plethoras of authorites, upheld the objection raised by the defendant in the suit.

In striking out the suit, Justice Aluko held that; “the subject matter in the Plaintiffs’ case is a general interest common to all registered members of the public in Lagas State particularly on right to yote or be voted for. The right to vote or be voted for is a general public interest common to all registered members in the state and not peculiar, personal or private to the Plaintiffs.

“Furthermore, the Plaintiffs’ affidavit evidence did not reveal which of the local government Areas they come from or whether their wards fall within the alleged balkanised 20 local Government Areas or 37 Local Council Development Areas. There is no credible evidence to show that the Plaintiffs ave registered voters or restdents in the state.

“This goes to affect their locus standi and also establishing the fact that the rights to vote and be voted for which the Plaintiffs seek to protect is not their personal, or private right but rather a public right common to all.

“Coming from the foregoing, I hold the considered view that the reliefs of the Plaintiffs as endorsed on the originating summons are not covered by the provision of section 251(1) of the Constitution and that upon examination of the claims and affidavit of the Plaintiffs, they do not have the requisite locus standi or legal capacity the institute this suit.

“As a result of this, the lone issue regarding the jurisdiction of the court to entertain the instant action is resolved in favour of the objectors against the Plaintiffs.

“Consequently, I hold that there is merit and substance in the objections raised vide the notices of preliminary objection.

“The preliminary objections of the Defendants hereby succeed and are sustained. This suit is accordingly struck out. I make no order as to cost”.

“An Order of perpetual injunction restraining LASIEC from organising or waderteking to hold local councillorship elections In excess af the legally recognised 245 wards in Lagos Stote,

But the defendants through their counsel, Mr. Kemi Pinheiro (SAN) and the State’s Attorney-General, Moyosore Monsuru Onigbanjo (SAN), had asked the court to Strike our or dismiss the suit, for lacking in merit and that the Plaintiffs have no rights whatsoever to institute same.