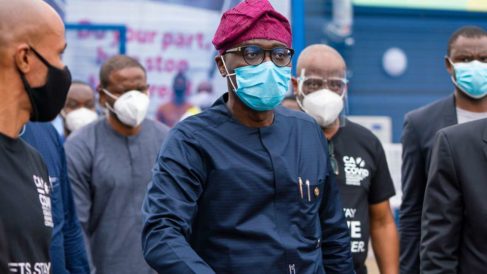 The Lagos State government has said it has arrested no fewer than 556 persons and convicted 502 others for breaching COVID-19 Regulations, since the advent of the pandemic’s second wave.

It also stated that 32 clubs and event centres have also been shut by the Lagos State Safety Commission including the Event Hall of Eko Club, which was closed down last Tuesday.

It was further stated that prosecutors in the state, are making requests to the  presiding magistrates, to ensure that anyone apprehended for breaching COVID-19 Regulations is made to undergo a mandatory COVID-19 test.

These and more were the contents of a January 14 letter from the Lagos State Ministry of Justice, sighted by newsdishng.com

The the said letter was addressed to a lawyer and member of Body of Benchers, Kunle Uthman by Mr. Moyosore Onigbanjo (SAN), the State’s Attorney-General and Commissioner for Justice, over the concerned raised on the pandemic’s second wave in Lagos.

Uthman, had in a January 13 letter to the AG, accused the Lagos State Government of inadvertently aiding the spread of the COVID-19 pandemic, adding that things were “business as usual” in the state.

He alleged that the state was failing to enforce safety protocols, and that government officials were complicit in flouting COVID-19 preventive protocols.

Uthman referenced a “funeral outing party… held with grandiose fanfare without social distancing and failure to enforce the wearing of face masks,” at a “prestigious” club hall in Surulere with capacity in excess of 2,500 persons.

“As it is, day-by-day, these large parties are being organised and attended by even highly placed LASG officials,” he added.

But in his response, the government described some of Uthman’s conclusions as” misconceptions and inaccuracies which need clarification.”

Onigbanjo said: “The State Government never shied away from admitting that Lagos is indeed the epicenter of the virus in Nigeria. But is it “business-as-usual”? Most certainly not”.

He noted that last March 27, Governor Babajide Sanwo-Olu signed into Law the first COVID-19 Regulations to be issued by any government nationwide, adding that thousands have been successfully treated and discharged from the state’s isolation centres and home based care till date.

Onigbanjo said: “When the 2nd wave started, Mr. Governor (even whilst just recovering from being infected with the virus) addressed a press conference on 18 December 2020 and shut down, nightclubs, lounges, concerts and bars. The number of people who could attend social functions/restaurants was reduced and event centres were mandated to get clearance from the Lagos State Safety Commission before going ahead with any event.

“A plan to construct three oxygen plants was launched and on the 8th of January 2021 the first installed oxygen plant was commissioned at Infectious Disease Hospital, Yaba. This is capable of producing 60 large cylinders a day of high grade medical oxygen”.

He explained that apart from arrest of COVID-19 protocols violators, and in furtherance of prosecutors’ request for mandatory COVID-19 test for defendants in Covid-19 trials, anyone who tests positive is immediately taken to an isolation centre.

Onigbanjo added: “COVID-19 tests are still conducted for free at State government test and sample centres. About 20 private labs are to carry out tests in order to provide alternatives to members of the public who want their tests done for a variety of reasons. It is only these private labs who charge a fee for tests.

“As it relates to Event Centres, the extant Regulations remain that all Event Planners must obtain prior clearance from the Lagos State Safety Commission (lasgsafetyreg.com) for all events and ensure that any planned gatherings do not exceed the prescribed number, while nightclubs, bars and lounges remain closed.