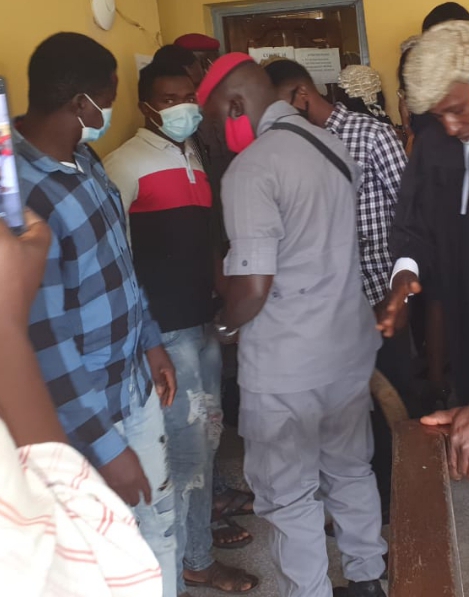 The Defendants After Their Arraignment

A Nigerian, Isiaka Musa and two Guinea citizens, Traore Djakouba (Yakubu) and Mohammed Berete, were today, arraigned by the men of Nigerian Customs Service (NCS) before a Lagos Federal High Court, for attempting to smuggle large quantities of elephant tusks and pangolin scales and claws.

The defendants were arraigned on a five count-charge of conspiracy, and attempt to export the items without lawful authority.

Arraigning the defendants, the prosecutor, Mr. Smath Akande, who led C. C. Igboko; Michael Osom and Shitta-Bey, told the court that the defendants, who are residents of 10, Ijeoma Odika Street, Atlantic View Estate, New Road, off Lekki-Ajah Expressway, Lagos, were arrested on July 28, 2021, with 196 sacks of Pangolin Scales weighing 7137.40kg; one sack of Pangolin claws weighing 4.60kg and 29 sacks of Elephant Tusk weighing 870.4kg, which they had prepared for exportation.

NCS has put the monetary value at N22. 3 billion.

The prosecutor told the court the defendants allegedly committed the offences alongside Muyribein Bereye and Sediki Berete also Guineans, were said to be at large.

He also told the court that the offences committed by the defendats are contrary to Sectons 64(1)(b) of Customs and Excise Management Act, Cap. C45 Laws of the Federation of Nigeria 2004 and punishable under the same Section of the same Act.

Upon the reading of the charges to the defendants, with the assistance of an interpreter, Kabah Abdulahi, they all pleaded not guilty to the charges.

Upon their not guilty plea, the prosecutor, Mr. Akande, asked the court for a trial date, while also urged the court to remand them in the custody of the Nigerian Correctional Services (NCoS) pending the determination of the charges against them.

But their Counsel, Mr. Olayinka Lawal, informed the court that he had filed his clients’ bail application and same has been served on the prosecution, since July 18, when his clients were first brought to court.

Responding to the counsel’s application, the prosecutor, told the court that though, they were served with the bail appllication, but it is not ripe for hearing, as th defendants were yet to be properly arraigned before the court.

The prosecutor told the court that there is need to file a counter to the application, owing gravity of the offence and the national of the defendants.

He therefore asked the court for a short date, so that he can respond to the application.

Ruling on the counsel submissions, Justice Tijjani Ringim, agreed with the prosecution that the matter is coming up before him for the first time and that the prosecutor is still within time to respond to the applications.

Consequently, Justice Ringim adjourned the matter till September 1, for hearing of the defendants’ bail applications. While also ordered that the defendants be remanded in the family of the Nigeria Customs Service.