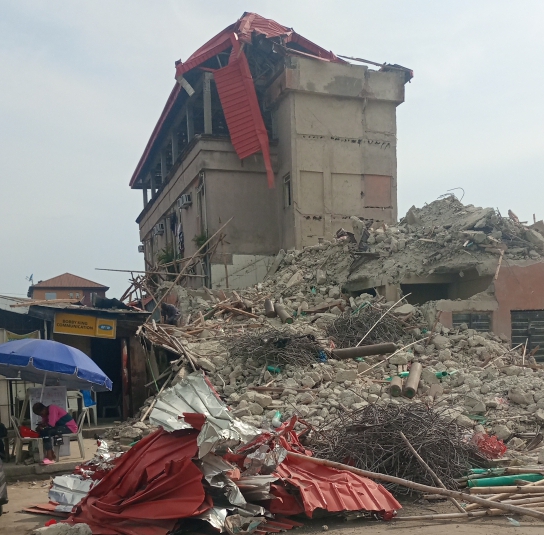 Inhabitants of Obalende in Eti-osa Local Government area of Lagos State, have decried the move by the State government in demolishing their houses under the disguise of remodeling the ancient community.

The Obalende residents, who claimed that the lands were given to their fore father’s, even before the 1914 amalgamation of Nigeria, by the then Colonial master, lamented the demolition of their structures, despite a subsisting court judgment, which barred the  State government, from encroaching the land.

The Lagos State Government has since last week Tuesday, commenced demolition of houses in the area.
Some of the houses demolished were sited at 20 and 51 Moshalashi street51, 69, 77, and a church at 83, all in Eleshin Street, a five storey buildings on Dodan barracks road and many others.

The residents, who spoke on the demolition through the duo of Mr. Nurudeen Olaitan Olokowo and Pastor Jacob, thie Community’s chairman of the Landlords Association and an elder, respectively, appeal to the State government to respect the court judgment and give them necessary approvals to rebuild their houses by themselves.

Speaking on the demolition, the Chairman of Obalende Landlords Association, Olokowo said; “before the 1914 Nigeria’s amalgamation, this place that is called obalende, it’s been occupied by the colonial masters’ drivers. When they wanted to build King’s College and Supreme Court, those living there then we’re relocated to this place and it’s called ‘Obalende’, since then people have been living in Obalende. The then government, legalized the land to the people living there by given them lease, some of 100 years, some of 60 years, it’s varied.

“Around 1997 or thereabouts, lease of most people in Obalende expired, and they applied to Lagos State for renewal but the government was playing hanky panky. Upon that, those living here sued the Lagos State, Ministry of Physical Planning and some agencies of the State and the case lasted for some years, at the end, the court ordered the Lagos State Government to renew the lease of all people living in Obalende.

“Then the State Governor, Brigadier Buba Marwa, had given order for the renewal of the lease but said all cases in the court should be withdraw, which we did, but since 1998, the Lagos State did not appeal the Judgment and the lease was also not renewed since 1998 and it became back and front.

“In August this year, they came to obalende and pasted a notice on all the houses that we’re giving 48 hours to come to Alausa with all documents on each building, failure with all the houses will be demolished. We thought it was a joke, four days after, they (Lagos State Building Control Agency; Ministry of Physical Planning and Urban Development) came as usual with armed Mopol and pasted another Seven days notice that if we failed to come with all documents as directed, they will come and demolish the houses. It’s either the owners of the houses demolish it by themselves or they demolish it and the owners pay for the demolition.

“So, we called on our lawyer, who went to meet them without documents and after going there they made a publication inviting all of us. On getting to Ikeja, we saw the banners reflecting all that they wanted to do in Obalende, they told us that Obalende is a slum, we all rejected the statement and told them that Obalende is not a slum and they apologize.

“They now told us that they wants to remodel Obalende and that they are not sending us away neither grabbing our land, but they want build sky scrapper, after which they will alot to them according to each ones status, those that entitled to 2-bedrooms flat, those that entitled to 4-bedroom duplex, will be given accordingly. They told us that there is nothing we can do, they will do what they intend doing.”The General Manager of LASBCA, Gbolahan Oki, said our first meeting will be on October 1, when they will come to Obalende, as all the houses been constructed in Obalende are without approval. Saying that the ones being constructed now shall be made as an example. Truly, on Tuesday, on October 20, they came with five caterpillars and they started demolishing all houses that we’re mostly completed. And they’re three storey buildings.

OurAppeal “We’re now appealing that the Lagos State should respect the court judgments and give us the necessary approvals, because, at our meeting, we asked them to tell us how they wants us to build the houses since they’re the one to supervise it, all of us in Obalende are capable of building our houses, be three or four storey buildings, we will build it, that is where we stop, so far, about 12 to 13 houses have been demolished.

“And incase, they didn’t listen to our plea, we believe that we are in a country that is governed by the law, our lawyers are also making move to take the necessary legal steps
The judgment of 1998, which they didn’t not obeyed, this time around, the court will compel them to obey and respect the Judgment”.

“They were talking about getting us a better building, and at the end of the day, we’ll be giving a small portions, but we said no to that. Because we knew that this is a Crown land, it was given to our fore-fathers by the federal government. We have been at Lands in TBS several times, we have sent representatives to Abuja, unfortunately, we couldn’t reach to Governor fashola then. When we got to Lands at TBS, because we have been paying our Land use to the state Government, they said we should not pay anything to the State because it’s Federal land, they came here, their lawyers with ours discussed on the renewal of leases.

That’s what we’re expecting from the Federal Government, especially, when we attained the age of 100 years, which we celebrated here by our late fathers, sir obilana, sir Ajayi and Co, but it was not forth coming. Just of sudden, recently, we have the parastatal called LASBCA, sending signals and notices to all houses in Obalende, and going through all those notices, it was very funny, since I’ve been staying in Obalende, my grand mother didn’t erect any storey buildings, and it is what we had we are still using but they’re saying that they’re are come to rebuild the place.
When we went to Alausa, they told us emphatically that they’ll come but they will tarry it a while. They told us that they will be coming on October 1, they’ll touch some houses because they don’t have approval.

“Secondly, they called another meeting, though, I was not there but they said the DG Gbolahan oki said they’ll be coming to touch some houses, because they don’t have approval, especially, the developers building them. And unfortunately, the developers are not cooperating with the associations in Obalende so that we can get to the root of the matters.

“This week Monday, all of sudden, they brought caterpillars, bulldozers armed policemen and started demolishing, they demolished not more than eight building that day. This is a big loss.

“All we want to appeal to them, since we have been having issues with them, they did not let us Know what they want, that is our problem. We are just hearing rumours, which I don’t believe it can happen. Let us know what they want.They should allow us to develop our lands by ourselves. It’s because we’re not given necessary documents to use in developing it. We can develop our lands by ourselves.

“We’re appealing to the Lagos State, we’re law abiding citizens, we don’t want to have any entangle with the state Government, we’re peace loving people, even, when there was a crises between Yoruba and Hausa at idiaraba, we’re all here living peacefully. We’re one here wants to appeal again, let them give us peace of mind”.