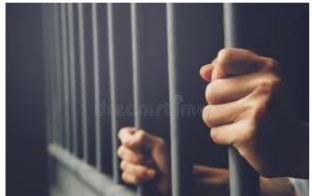 An Ota Chief Magistrate’s Court, Ogun State, has convicted and sentenced a dismissed Police Officer, Joseph Ayodele, to five and a half years imprisonment for terrorising people and grabbing their lands at Gbayunre Village, Atan-Ota, Ogun State.

Chief Magistrate Mr O. L. Oke, who presided over the court, convicted and sentenced Ayodele, 60, after pronouncing him guilty of the four counts of conspiracy, breach of the public peace, intimidation and forcible entry into the land, in a charge marked MOT/212c/2021.

Chief Magistrate Oke held that the sentence shall run concurrently, adding that it shall be served at the Ibara Correctional Centre. He however, gave the Convict, Ayodele an option of a N500, 000 fine.

Oke in his Judgment held that: ”I have considered the provisions of Sections 415 and 430 of the Administration of Criminal Justice and Other Related Matters Law of Ogun State 2017, as it relates to sentencing.

“I have considered the provisions of the Ogun State Judiciary Sentencing Guidelines and Non-Custodial Alternatives Practice Direction 2020.

“The convict along with others now still at large repeatedly terrorised people who were in peaceful and actual possession of their property pursuant to a judgment of a competent court of law.

“The convict and his cohorts acted in flagrant disregard to the rights of these people and committed the offences. He is indeed fortunate not to have been charged at the High Court pursuant to the prohibition of forcible occupation of landed properties, armed robbery, kidnapping, cultism and other anti-violence related offences Law of Ogun State 2016.

Earlier in his allocutos, the convict pleaded with the court to have mercy on him, saying he was not a trouble maker.

His lawyer, Mr Bankole, added: “The defendant is a first time offender, he has never been convicted before in any case or matter like this. I urge this court to temper justice with mercy.”

The convict was arraigned before the court on August 3, 2021, after being accused of being the leader of land grabbers (Omo Onile) who attacked policemen, snatched their gun and handcuffs and took them away, at a construction site in Kajola, Atan-Ota, Ado Odo/Ota Local Government Area, Ogun State.

Ayodele was also alleged to have induced fear in the complainants after entering their land.

The convict was arraigned alongside one Adejare Lawal, A.K.A play Boy; Kamolu a.k.a eye, Deji, a.ka. Sugbegbe, Saliu Falola, A.k.A. Maja, all still at large.

The dismissed police officer and others were alleged to have committed the offence between September 2, 2017, till his arrest.

The prosecutor, Inspector Grace Adebayo, told the court that Ayodele conspired with the others and committed the offences at Gbayunre Village, Atan- Ota, Ogun State.

She said he conducted himself in a manner likely to cause a breach of peace by entering Gbayunre land which has been in actual and peaceable possession of Chief Wasiu Amoo Dada, Sunday Dada, Samuel Olugbenga Dada and their family members.

He pleaded not guilty.

During the trial, the prosecutor called three witnesses and the defendant testified for himself and also called two witnesses.