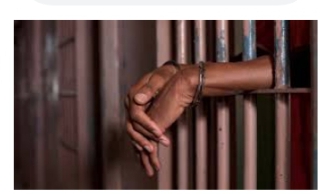 A drug Baron, Nzubeka Emmanuel, was today, convicted and sentenced to 10 years imprisonment, for unlawful dealing in 1.050 kilograms of Cocaine, by a Lagos Federal High Court.

Justice Jude Kanyon Dagat, who presided over the court, convicted and sentenced the drug Baron to the jail-term, after finding him guilty of one count charge brought against him by the National Drug Law Enforcement Agency (NDLEA).

The drug lord journey to prison started sometimes on June 4, 2015, when he was arrested at the SAHCOL Export Shed of Muritala Mohammed International Airport, Ikeja, Lagos, when he wanted to unlawfully export 1.050 Kilogrammes of Methamphetamine, a narcotic drug similar to Cocaine and Heroin.

Upon his arrest, he was brought before Justice Dagat, on a count charge which read: “that you Nzubeka Emmanuel, Male, Adult on or about the 4th day of June 2015 at SAHCOL Export Shed of Muritala Mohammed International Airport, Ikeja – Lagos within the jurisdiction of this Honourable Court lawful authority Exported 1.050 Kilogrammes of Methamphetamine, a narcotic drug similar to Cocaine, Heroin or LSD and thereby committed an offence contrary to and Punishable Under Section 11(b) of the National Drug Law Enforcement Agency Act Cap N30 Laws of the Federation of Nigeria, 2004”.

The convicted drug Baron denied the allegation, and pleaded not guilty to the charge.

Following his not guilty plea, the anti-narcotic agency through his prosecutor, Mr. Austine Nwagu, commenced his trial. During the Convict’s trial, seven witnesses were called and several items including the seized banned drug, his confessional statements, forensic report on the drug, and others were tendered and admitted by the court as Exhibits.

The convict was the only one the proved his case to defend the allegation.

However, delivering judgement in the charge today, Justice Dagat, who is currently sitting at the Maiduguri, Borno State, but has the Court’s Chief Judge’s ‘fiat’ (authority) to conclude the matter, held that; “the prosecution, based on the overwhelming evidence and facts, and exhibits presented before the court,  has successfully proved the charge against the Convict beyond every reasonable doubt”.

The judge however, ordered that the nine months used by the convict before meeting the bail terms, be removed from the jail-term.