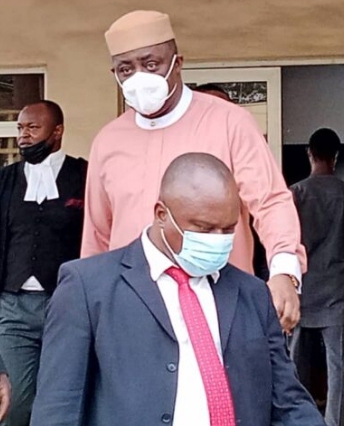 Fani-kayode was arraigned on a 12 count-charge bordering on the alleged offences before Justice Oluwabunmi Abike-Fadipe of the Lagos State Special Offences court, Ikeja.
In the charge, the antigraft agency accused the defendant of presenting five fake medical reports, before a Lagos Federal High Court, where he is currently standing on money laundering charges alongside former Nigeria Minister of Finance, Nenadi Esther Usman and one other.

The former Minister, who recently defected to the ruling All Progressive Congress (APC), was however admitted to bail in the sum of bail in the sum of N5 million, following an oral application made by his counsel Wale Balogun after he pleaded not guilty to the charges.

This followed an oral application made by his counsel Wale Balogun after he pleaded not guilty to 12 counts of alleged forgery of medical reports between 2018 and 2021.

Earlier in the day, Justice Abike-Fadipe ruled that he must be arraigned first before hearing his preliminary objection against the validity of the charge

According to the court, the purpose of these provisions of the law is to ensure speedy dispensation of justice and to reduce delay tactics often used by defendants to stall criminal trials brought against them.

The judge added that the argument raised by the defence counsel, Wale Balogun that the court declines jurisdiction, because the charges fall outside the scope of the Economic and financial crimes commission prosecuting the matter shows that it is challenging the validity of the charge which falls within the scope of the quoted laws.

In conclusion, the court ruled, “I am thus satisfied that based on section 396 of the ACJA and 374 of the ACJL (as amended) that before this court proceeds to take the preliminary objection raised by the defendant, to the charges preferred against him by the prosecution, the charges must be read to him”.

The judge later held that hearing of the preliminary objection will be argued in February but a ruling will be delivered along with the final judgment on the case in accordance with the extant laws.

According to the EFCC’s prosecutor, Rotimi Oyedepo, the former Aviation Minister through one Dr Ogieva Oziegbe procured fake medical reports on various occasions to avoid attending his trial at the Lagos Division of the Federal High Court.

“The defendant falsely purported before a Federal High Court, Lagos in charge number FHC/L/251C/2016 that the reports were issued by either Kubwa General Hospital or the Federal Ministry of Health, Abuja, Federal Staff Hospital,”

The judge adjourned to February 4, 2022, for a report on the fulfillment of all preliminary requirements by both sides and fixed February 23, 25, and 28 as hearing dates.