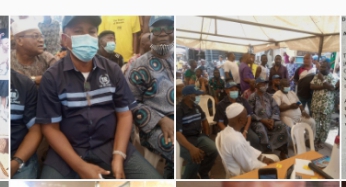 Pic: Hon Eshinlokun And Other Guests (L), Beneficiaries Of The Club’s Free Health Screening, Held Over The Weekend (R)

The Deputy Speaker of Lagos State House of Assembly, Honourable Wasiu Eshinlokun Sanni, has advised a Lagos based social organization, The Reliable Social Club and others, to embark on youth empowerment and mentoring across Isale-Eko Community.

Hon. Sanni, who is the immediate past Chairman of Lagos Island (West) Local Government, gave the advice at the weekend, during the inaugural Free Health Screening by the club over the weekend.

He commended the President of the Club, Mr Kunle Kadiri and his members for their effort to come up with the Free Health Screening program for the residents of Isale Eko Community. While frowned at the lackadaisical attitude of youth towards self-employment in the society.

Honourable Eshinlokun, who doubled as a member and Mayor of the Club,  promised to continue to support the Club morally and financially.

In his speach, Mr. Kunle Kadiri the Club President announced that the club has many programme lined up for the residents of the community and urged the residents to grab the opportunities with both hands. While assuring Hon. Eshilokun that his advised will be worked upon.

The program which lasted for two days witnessed the residents embracing the opportunity to do free Medical Checkup which includes Free BP, Diabetes and Tuberculosis Screening with free drugs was graced by Chief T. A. Y Yussuf, Olorogun Atebo of Lagos, Alhaji Bashiru Wowo, The Governor-General of the Club, Surv., Lookman Quadri the former President of the Club, Club members and many dignitaries of the society.