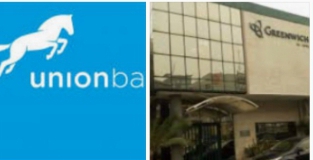 A High court of Lagos State, sitting in Osborne Estate, has adjourned till June 27, to hear the suit filed by Union Bank Plc, seeking the eviction of newly-licensed Greenwich Merchant Bank from it’s headquarter at Oyin Jolayemi Street Victoria.

Justice Abdullahi Oyekan who presided over the court, fixed the date for hearing of all pending applications in the suit.

At the resumed of the suit on Thursday, Union Bank’s counsel, Barrister Adetunji Adedoyin-Adeniyi of AAA Chambers, told the court that he has filed an application seeking to discharge the order earlier granted and to set the originating summons down for hearing.

It made the prayer as defendant/counter-claimant in suit instituted by Greenwich Bank which is the claimant/defendant to counter-claim.

Union Bank averred that it leased the property, measuring 350 metres square, to Greenwich Bank via a sublease agreement for a fixed term of two years commencing on April 1, 2020, to March 31, 2022.

It averred in its May 27, 2022 counterclaim filed by Adedoyin-Adeniyi before Justice Taofiquat Oyekan-Abdullahi, that Greenwich Bank used the property as its headquarters but that the lease had been determined, thereby empowering Union Bank to evict the claimant/defendant to counter-claim.

It said Greenwich Bank approached the court to frustrate Union Bank’s right to recover vacant possession of the property upon expiration of the Lease on March 31, 2022.

Union Bank contended that Greenwich Bank filed the suit in an attempt to arm-twist it to renew the sublease agreement between both banks.

“The instant suit amounts to an attempt to force a willing tenant on an unwilling landlord as the Defendant/Applicant has through its agent and subsidiary company; UBN Property Company Plc vide the letter dated September 30, 2021 indicated that the Claimant/Respondent should vacate the premises upon the expiration of the two (2) years certain provided in the Deed of Sublease.

Union Bank had asked the court for a declaration that by a September 30, 2021 letter written by the Defendant/Counter-claimant’s agent and by Clause 4 of the Deed of Sublease between Greenwich Bank and Union Bank, “the Lease has been determined.”

It is also seeking a declaration that pursuant to its refusal to renew the lease agreement between parties, Union Bank is at liberty to evict Greenwich Bank.

Union Bank also asked the court for an order against Greenwich Bank to vacate the property, an order compelling Greenwich Bank to pay Union Bank “Mesne Profit at the rate of N10.5million with 21 per cent per annum from March 31 2022 until possession is finally delivered

“An order compelling the Greenwich Bank to pay Union Bank the sum of N100million as general damages for depriving the Union Bank of its property coupled with aggravated damages occasioned on the Defendant/Counter-claimant.”

The claimant, in its May 6, 2022 Statement of Claim, sought a declaration that there is an express and implied duty on Union Bank to enter into negotiations with it “for the purposes of agreeing on the new term and rental rate preparatory to the renewal of the sublease initially granted, following the Defendant’s receipt of the Claimants” Notice of Intention to Renew.”

It also sought, among others, an order of perpetual injunction restraining Union Bank “from the property or otherwise interfering with the claimant’s use and enjoyment of the property unless and except in accordance with the due process of law and court order.”