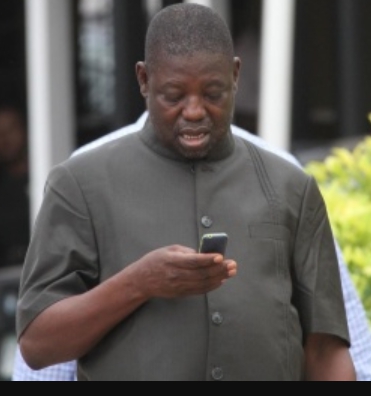 Jauro’s plea was taken alonge Dauda Bawa and a limited liability company, Thlumbau Enterprises Limited, on the 19 counts charge of the offences, made against them before Justice Chuka Austine Obiozor led-Court.

Their trial was at the stage of adoption of written addresses on the charge, when Justice Olatoregun retired from the Bench late last year, leading to their rearraignment before Justice Obiozor.

At the resumed rearraignment of the defendants today, their counsel, Mr. Olalekan Ojo (SAN) leading three others, informed the court of a letter dated November 6, 2020, written by the third defendant, Thlumbau Enterprises Limited, in which it nominated one Baba Haruna Salome, to represent it in the charge.

Ojo (SAN) said the company’s letter was in consonant with section 478 of Administration of Criminal Justice Act (ACJA) 2015.

Ojo (SAN) also notified the court of another letter written by the said company’s representative, Baba Haruna Salome, Secretary to the company, in which he urged the court to enter not guilty plea, for the company, and his readiness to represent the company in his capacity.

Following the submissions of the defence team, the prosecutor, Mr. U. U. Buhari who led Abass Mohammed, pleaded with the court to allow the defendants to take the plea on the charges.

The defendants however pleaded not guilty to the charges, after it  was read to them.

Following the defendants’ plea of no guilty, the prosecutor asked to the court for a trial date, while also asked the court to remand them in prison custody, pending the determination of the charge against them.

Responding to the prosecutor’s request for the remand of the defendants, their lawyer, Mr. Ojo (SAN), pleaded with the court to allow his clients to continue to enjoy the earlier bail granted them by the previous judge.

Ojo (SAN) told the court that his clients have been faithfully comply with the bail terms and that they have be diligently attend the court till the when the case reached adoption of written addresses, when the former trial judge, Justice C. M. Olatoregun retired from the Bench.

He therefore urged the court to graciously allow his clients to continue the bail conditions granted them on April 12, 2020.

Upon listening to the defendants’ counsel’s submission, which was collaborated by the prosecutor, Justice Obiozor, while adjourned the matter till March 17, 18, 22, 23, 24 and 25, 2021, for definite trial, ordered that the defendants continue with the former bail terms granted them by Justice Olatoregun, on April 12, 2016.

Jauro assumed leadership of NIMASA, after an erstwhile Director General of the agency, Patrick Apkobolokemi, who is also being prosecuted alongside others over multi billion naira fraud.

Jauro and others were accused of conspiring among themselves to defraud NIMASA to the tune of N304.1m between January 2014 and September 2015.

The EFCC agency had alleged that the accused converted the sums to their private use, an offence which it said contravened the provisions of section 15(1) of the Money Laundering (Prohibition) (Amendment) Act, 2012.