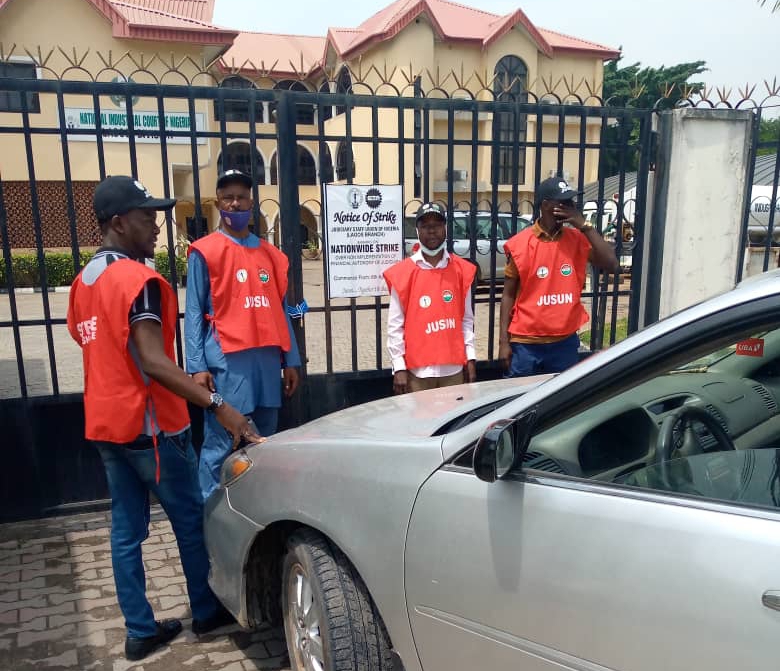 The Judiciary Staff Union of Nigeria, (JUSUN) has said its members will continue the over one-month-old strike until the accounts of the Judiciary are credited.

The decision according to an online medium, TheNigeriawyer.com, was reached by the National Working Committee of the Union on Wednesday 26th May, 2021 during its meeting with the body of Chief Judges.

“Earlier today, the NWC met with the body of CJs, and the issues as discussed with the govt team was raised. The Heads of Court are impressed with our efforts, observed a few clauses and encouraged us to be firm and resolute.

“I am directed to reiterate that until all Judiciary Accts are credited, the strike continues.” the Public Relations Officer of the Union said.

He recalled that the NWC initially met on Thursday 20th May, with the government team and a Memorandum of Understanding was reached. The MOA is yet to be signed by NGF and returned to the concerned quarters, however, we are informed that the documents are with the NGF.

However, it was learnt that states like Rivers, Bayelsa, Delta and Lagos have already complied with the provisions of Executive Order 10 by remitting money to the arms of government.

But they are expected to formalise the arrangement by setting up the fund disbursement structures as provided in the agreement.

However, the judiciary and the legislature were yet to receive their direct allocations as agreed.

One of the union officials was quoted by the online medium that they would wait till Friday to see if the governors would sign the agreement.

Under the agreement, the state governors have 45 days timeline from the date of signing of the agreement to implement the deal or the federal government would be forced to invoke Executive Order 10 by asking the Accountant General of the Federation to transfer funds directly to the state judiciary and legislative arms.

It would be recalls that the NGF Vice Chairman and Governor of Sokoto, Dr. Aminu Tambuwal, on Wednesday during a Colloquium organised by the Ekiti State Ministry of Justice Academy, in honour of the retiring Chief Judge of the State, Justice Ayodeji Daramola, expressed delight that consensus has finally been reached on the autonomy conundrum and opined that the strike is expected to be suspended anytime soon.

“The agreement allows a period of 45 days for implementation structures to be put in place across States including the enactment of a Fund Management Law which will grant the Judiciary the power to manage its capital and recurrent expenditures in accordance with the provisions of constitution.

“Budgetary releases to the judiciary will be pro-rated based on the actual revenues recorded each month by the State government. Monthly revenue reconciliation and allocation will be presided over by a State Account Allocation Committee (SAAC) to be set up under the Fund Management Law – a similar practice to what we have at the federal level.

“We hope that this will put an end to the long weeks of strike action that have seen our judicial and criminal justice system grounded to a halt. We have lost so much in the past weeks. The big takeaway is the centrality of communication, sincerity, trust and dialogue.